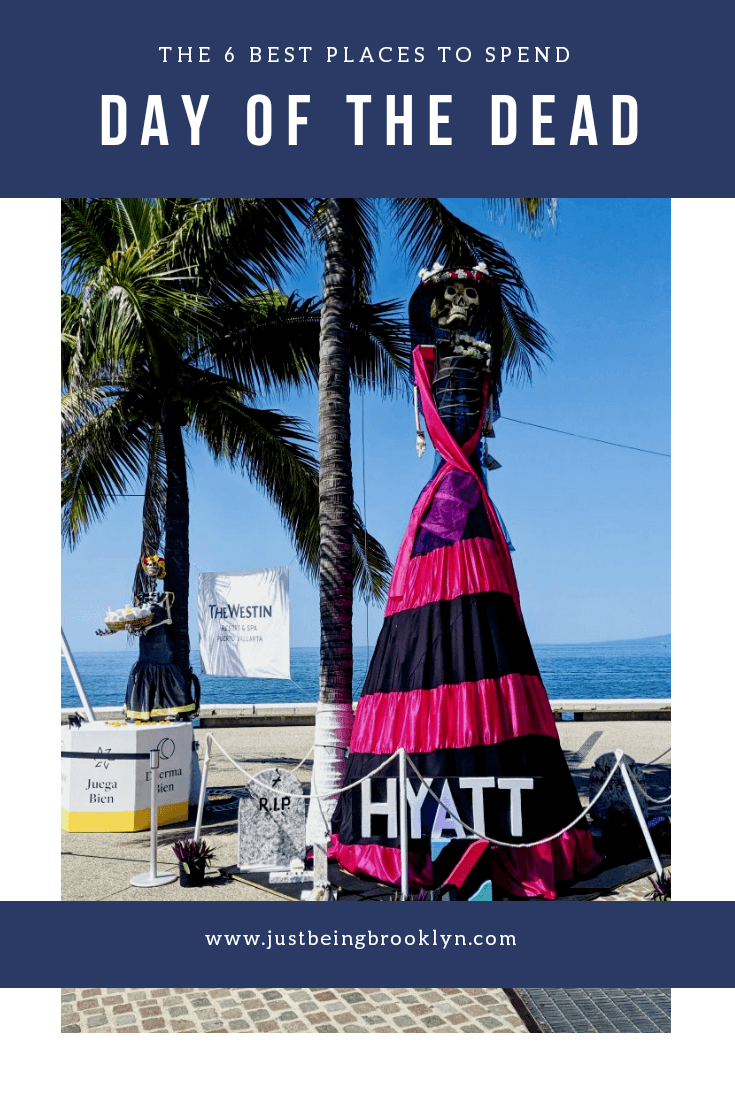 A year ago today I landed in Puerto Vallarta, ready for a week of fun and ready to experience a new country. I had timed this trip perfectly, we were there just in time for Dia de Los Muertos, otherwise known as Day of the Dead.

A time when people celebrate the lives of their deceased family members, celebrations vary in each location but the message stays the same- this is a time to spread hope that the deceased are resting peacefully, and a time for the souls of the departed to visit the living.

One of the first things I noticed was how everywhere had decorated for the celebration, including the majority of the bigger hotels advertising on the Malecon with huge skeletons dressed up.

I’ve already decided that one day I will spend another Dia de Los Muertos in Mexico. Not Puerto Vallarta again, but somewhere else to experience the celebration in another town.

Here are the 6 best places to spend Day of the Dead (Dia de Los Muertos) in Mexico! 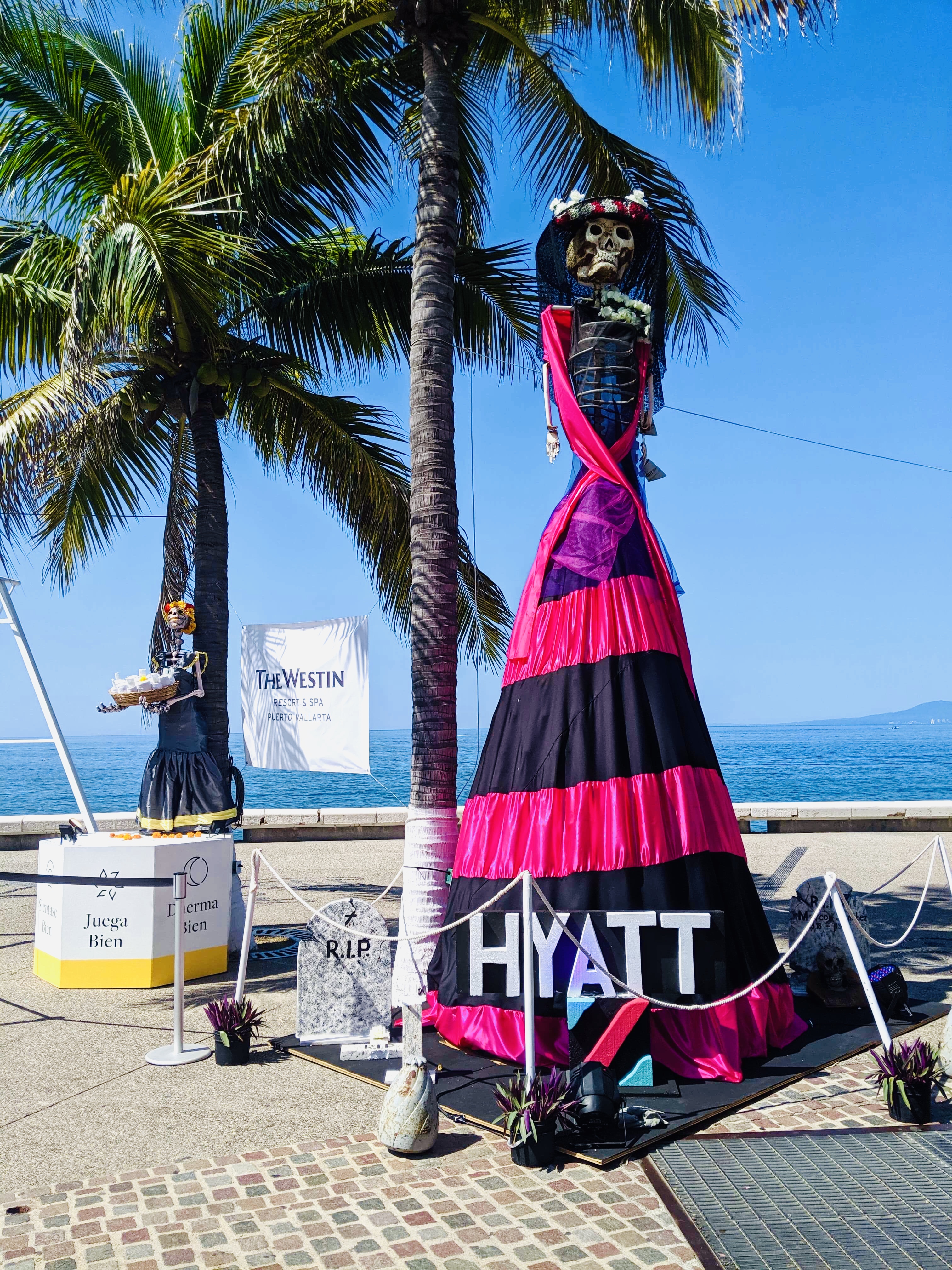 Island of Janitzio. The world’s most popular destination to celebrate Dia de Los Muertos, this island is truly tiny, but it is the place where the most authentic celebrations can be found.
Thousands of people gather here each year as it’s believed that this is where the idea that the spirits can return to Earth originated.

People flock here to see the fisherman in their rowboats, lighting the lake with their torches, making for a beautiful sight. There are musical processions, folk dances, and everyone gathers at the cemetery at night to sing and chant.

Guadalajara. The second largest city in Mexico, the celebrations here feel like the whole city is having one big party. During the evenings the town turns into one giant parade of people.

There are fashion shows, face painting (did you know that the skull face paintings are called the Catrina, and was created sometime between 1910-1913 as a satirical portrait of Mexican natives who were trying to become too European), a theme park called Calaverandia, and all of the usual cemetery love.

If that’s not enough there’s the Panteon de Belen cemetery, where you can see plays during the day, and go on tours at night. 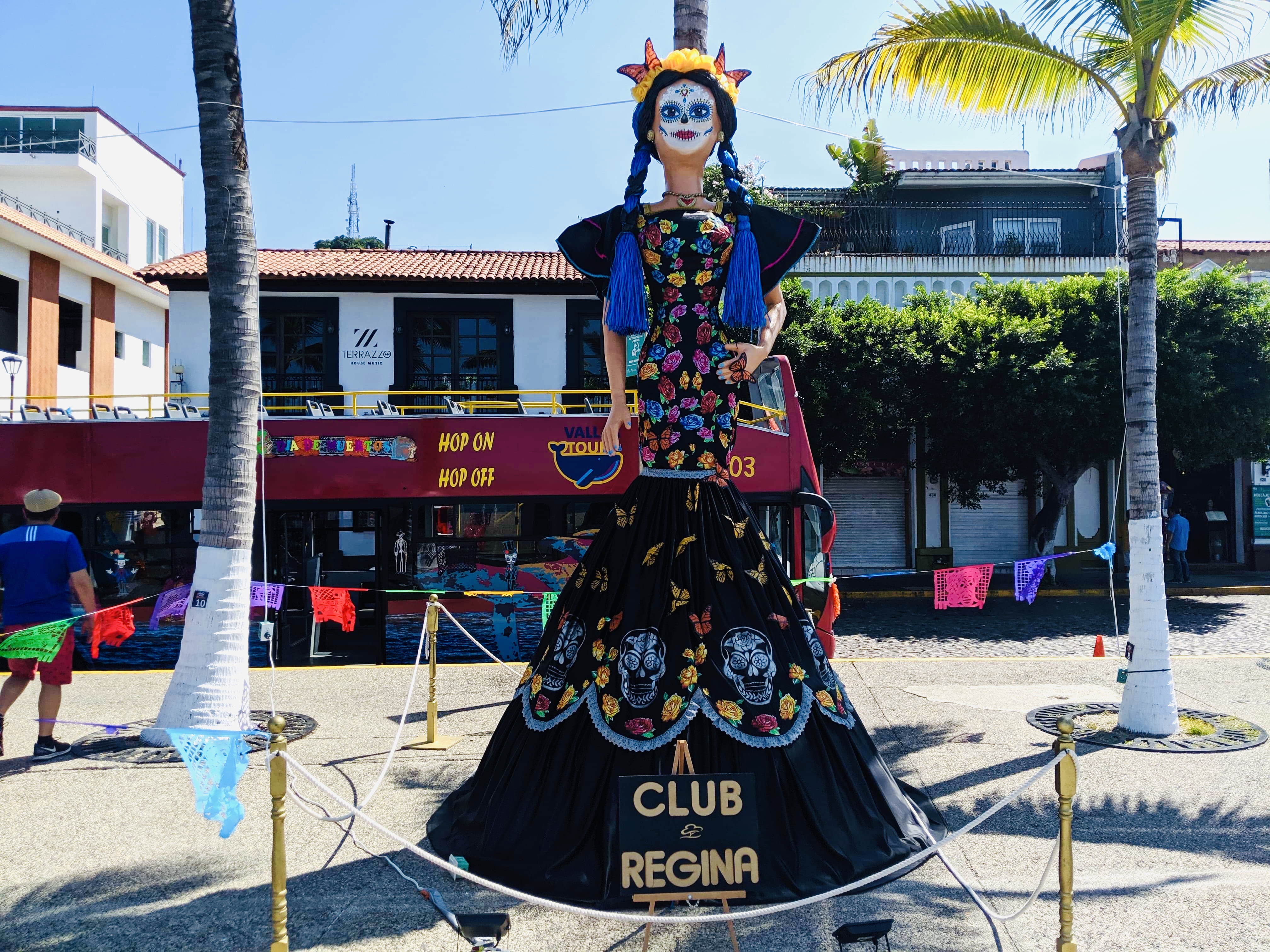 Oaxaca. Oaxaca has one of the biggest celebrations in Mexico when it comes to Dia de Los Muertos. The schools and social committees go all out for altar decorations. The markets have an abundance of products for both tourists and locals alike to use for their celebrations. Everything you could possibly need are found at these markets, including special foods prepared at this time of year specifically for Day of the Dead, such as Pan de Muerto (bread of the dead).

There’s also the Day of the Dead sand tapestries. When a person dies, after the burial the family and friends of the deceased person will gather for 9 nights around a sand tapestry. Usually this tapestry depicts a religious image that meant something to the deceased. After the 9 nights this sand is swept up and brought to the cemetery to be poured over the person’s grave.

For Dia de Los Muertos these sand tapestries are more whimsical skeletons found all over the city. 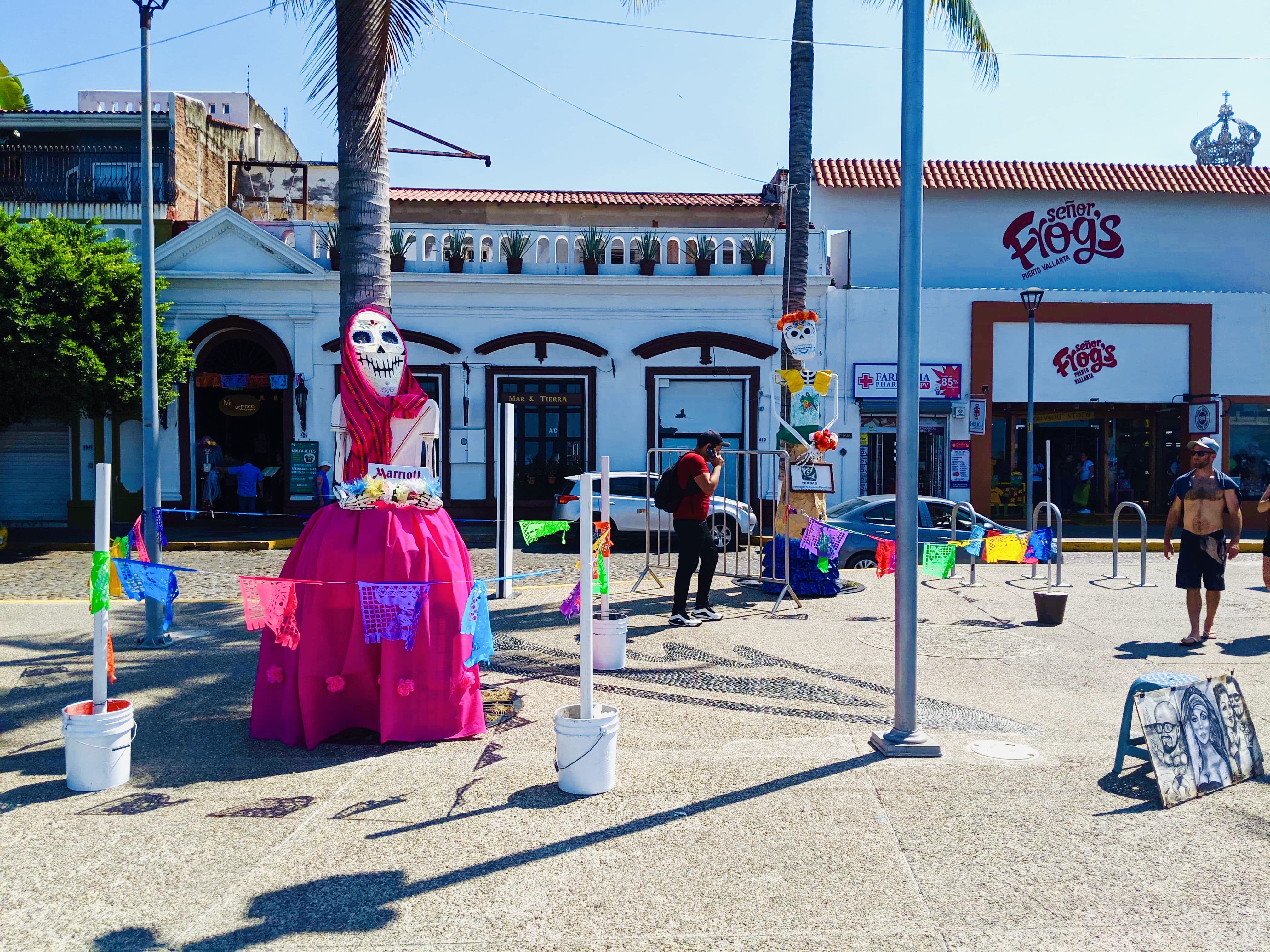 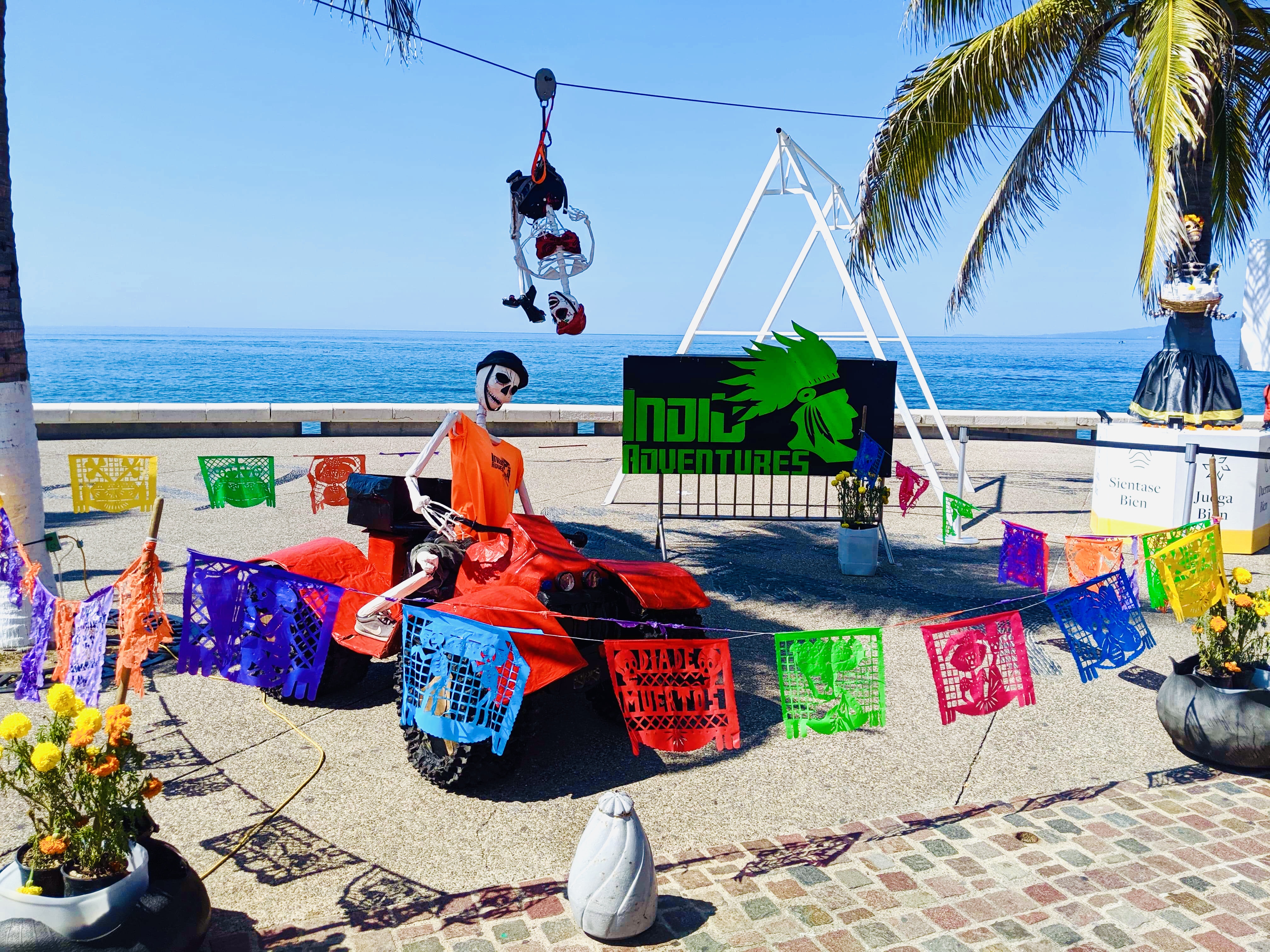 Merida. Food is incredibly important for celebrations in Merida. Merida is located in the state of Yucatan, and the Maya language is the most commonly spoken Mayan language that is spoken in Mexico, with just under a million people speaking it, and most of those people are located in Yucatan. Day of the Dead in the Maya language translates to Hanal Pixan, which further translates to Feast for the souls.

During this time friends and family gather to feast on pibipollo, which is a special chicken tamale wrapped in banana leaves. This dish is delicious for those who eat it, but even more importantly the spirits eat this dish as well, and its thought that the spirits consume the essence of the dish.

Other than feasting, Merida also celebrates by hosting festivals in the streets and cemeteries.

San Miguel de Allende. Often ranked as one of the best places to visit in Mexico, this town holds a four day festival every year during Day of the Dead, called Festival La Calaca (The skull festival), to honour the ancient traditions of Dia de Los Muertos. History, culture, arts, food, and family are important to La Calaca.

There is so much going on! If you choose to spend Dia de Los Muertos here, you can expect several parades, plays, art installations around the city, children’s workshops, DJ booths, and more!

Mexico city. The capital city of Mexico, it wouldn’t be right not to include Mexico city on this list. There are parades to attend, huge celebrations in the main square, dances, spiritual cleansings, you can take boat rides through the canals and learn more about the legend of La Llorona, and lots of artwork to see.

Essentially there’s no chance of you being bored while spending Dia de Los Muertos in Mexico city. 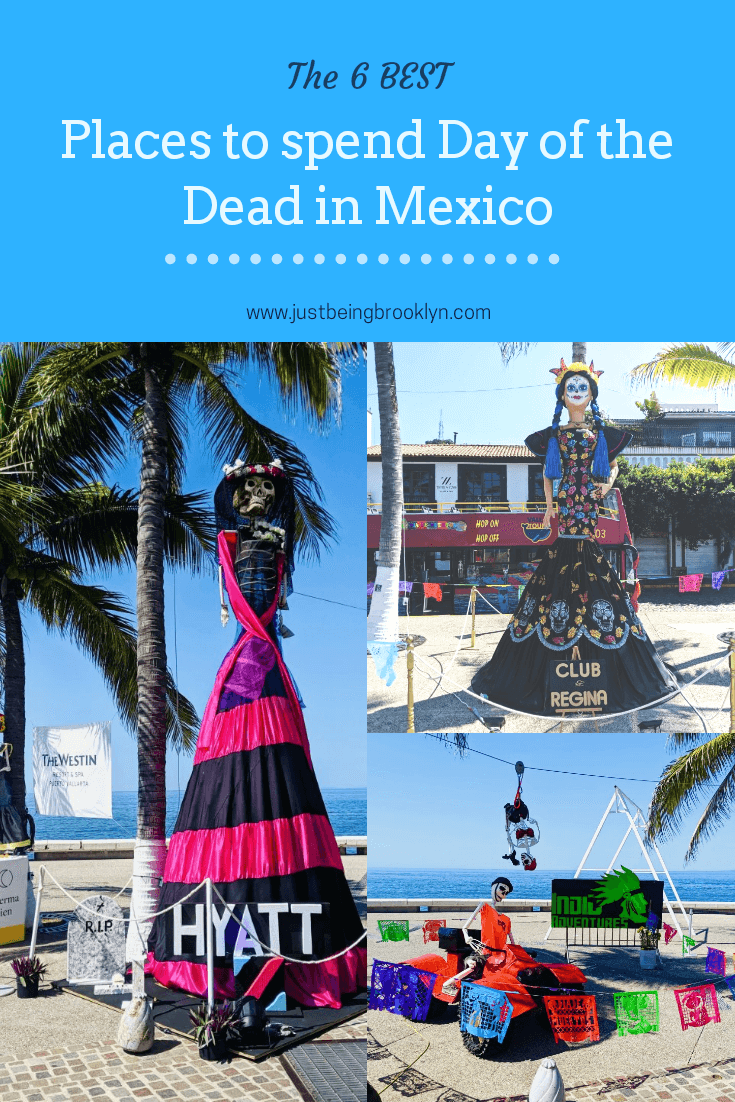 Out of this list of the 6 best places to spend Day of the Dead in Mexico, where would you most like to visit for Dia de Los Muertos? For me I think it would have to be Guadalajara or San Miguel de Allende. Both really stand out to me as being fun and informative, and I love how welcoming both cities are to tourists.

PrevPreviousHalloween Traditions Around The World
NextJBB Monthly Recap: October 2020Next