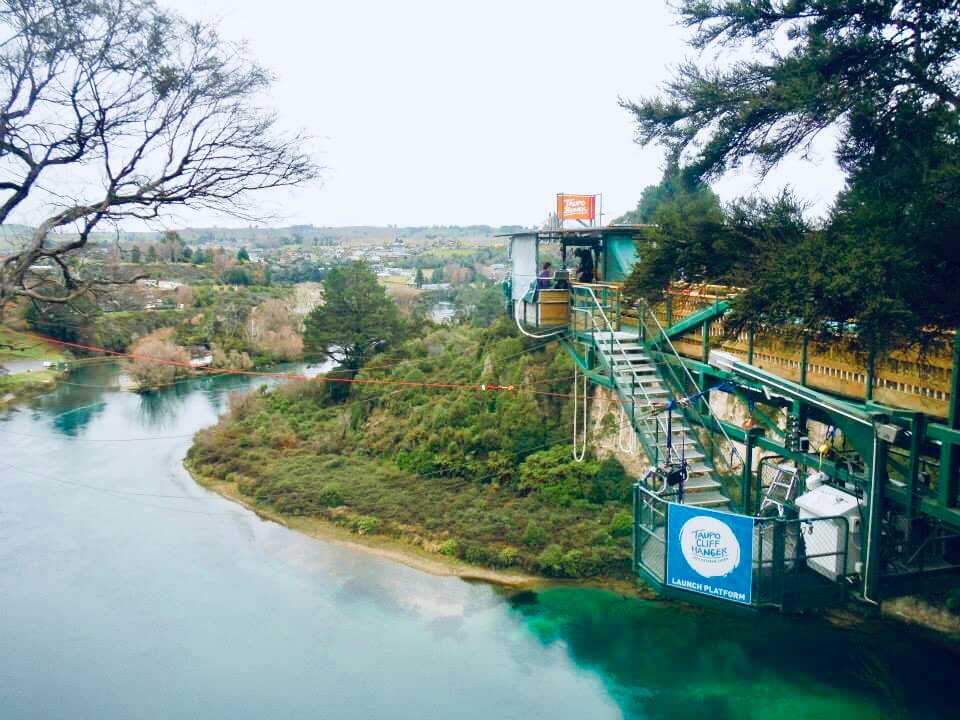 I had been feeling weirdly calm up until this point. Everyone kept asking me if I was nervous. I would just laugh it off like being nervous was a ridiculous thought. Now all I could think was “what on earth was I thinking? I must be crazy”. But so many others before me had taken the leap…Time for bungee jumping in Taupo, New Zealand.

I started my day in Rotorua. Finally I managed to go to Hobbiton with Hobbiton tours, which was the entire reason I chose to explore the North Island. Since I had been told the previous day that my bungee jump would probably be cancelled due to maintenance, I wasn’t in such a rush. I slowly made my way through the light rain back to my hostel, the YHA Rotorua, and called Taupo bungee to find out whether or not my jump was actually cancelled. Turns out it wasn’t. Eek!

I rushed out to my Jucy rental car, hopped in, and off I went! I had less than an hour to get from Rotorua, find my hostel in Taupo to check in, and then find my way to the bungee jump. Basically I had no time to get nervous, I was too focused on how my GPS seemed to be taking my through someone’s farm on a dirt road, and how I was worried about getting arrested. Seriously GPS, why on earth did you pick that route?

Next up, a construction worker was stuck on the side of a mountain, so I was stuck waiting for him to be rescued. I spent the wait chatting with the other workers, telling them about my upcoming jump. They got excited for me and let me pass through so I wouldn’t miss it. Thanks guys!

Through the mud and rain I finally made it to my amazing hostel, Black Currants in Taupo, with time to spare. No idea how that happened…as I was being shown to my room I met my roommate. Christine was by far the best hostel mate I’ve had yet. We instantly clicked, and her and another girl from the hostel decided to come watch my jump and ended up taking tons of pictures for me!

They kept telling me I was crazy.

I should have listened. 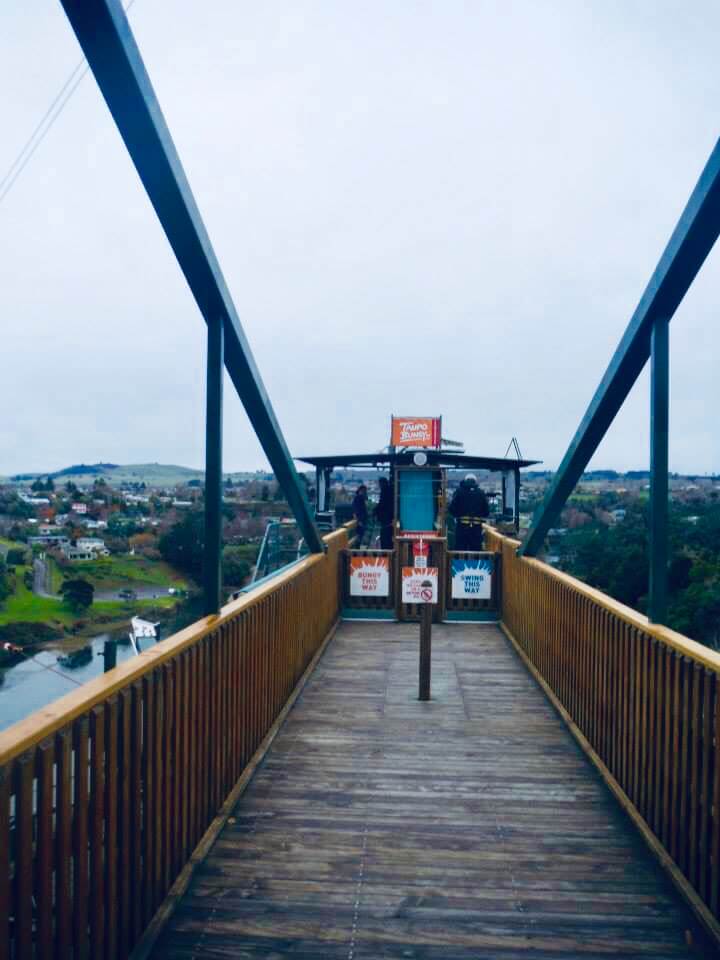 I walked into the building, checked in, was weighed, and told to make my way over to the platform. Leaving my new friends, I rushed over. I was bubbling over inside with excitement, yet on the outside you could hardly tell. There was such a calm expression on my face. The guys who were getting me ready for my jump kept asking if I was nervous. I just laughed at them.

The guys kept trying to get me to touch the water when I jumped but I refused. I had no desire to get wet I told them, it was too cold! They joked how a Canadian should be fine getting wet in winter.

In reality the reason I didn’t want to touch the water was because I was worried I would dunk into the water and start choking on water. Such silly thoughts that had me worrying. 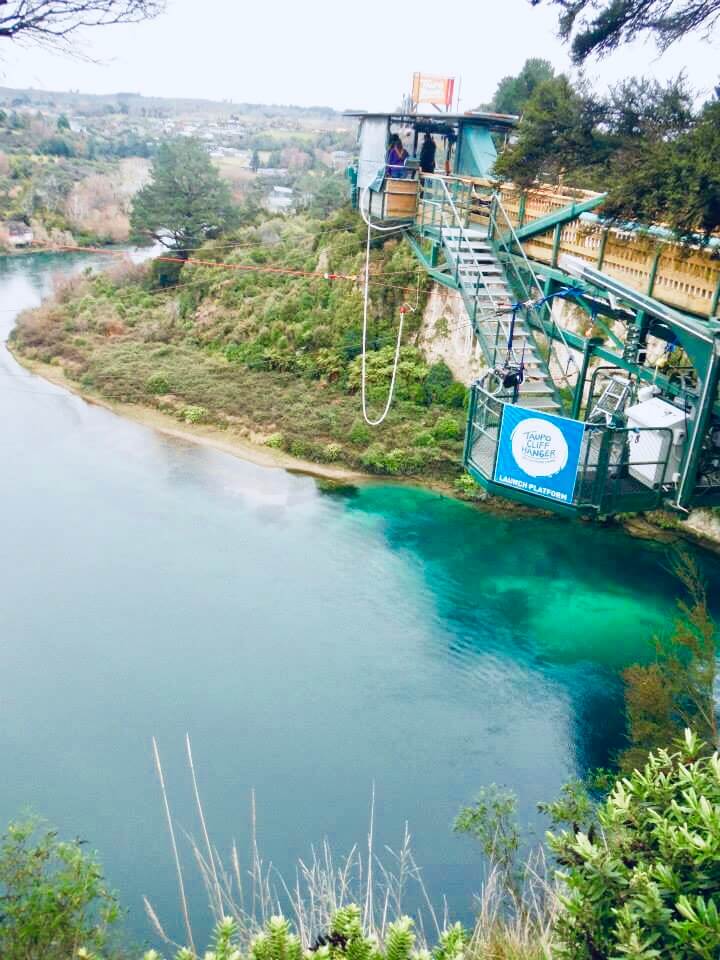 After what felt like forever of getting ready it was finally time.

I moved quickly over to the platform, so ready for this jump.

Then I looked down.

One of the guys began to count down. I lifted my arms, and when he got to two I quickly put my arms down again. I made a small squeaky sound. They were going to have to force me down.

But wait. I had seen videos of them pushing people off when they got scared. If that happened there would be no way I would have even a slightly graceful jump. No, I was going to have to do this on my own.

He began the countdown once more. This time when he got to one I willed my body to jump. It wasn’t jumping. I leaned my body forward, hoping that would work. Nope. I somehow got the top half of my body going, yet the bottom half had no plans to follow. My feet were still on the platform while most of my body had begun the jump. Or should I say fall… 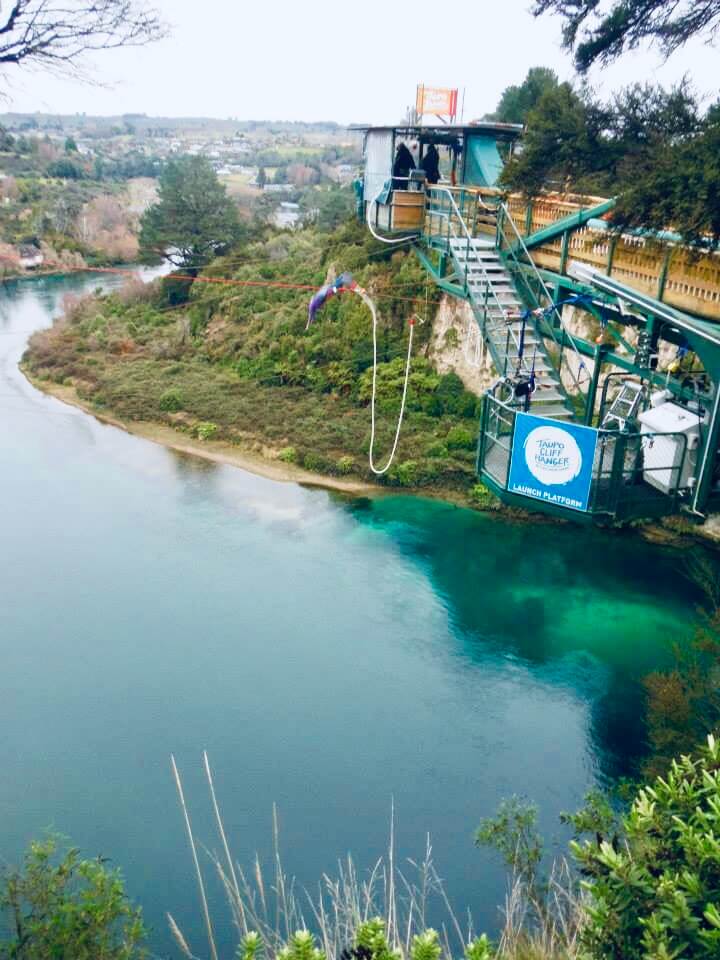 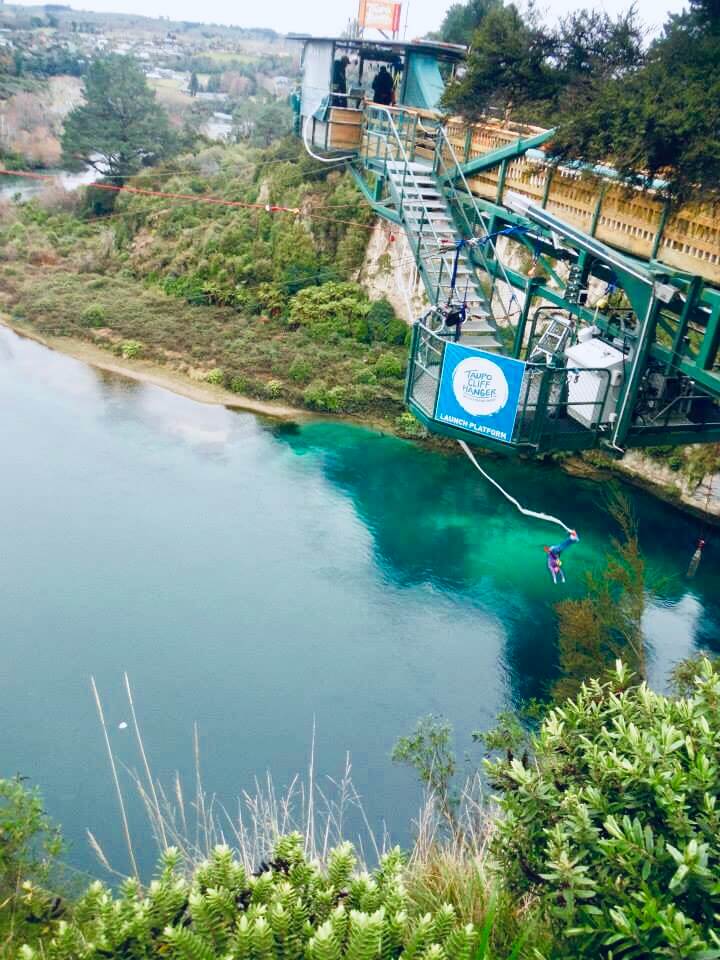 My feet finally followed when it wasn’t physically possible to stay on the platform any longer. I didn’t even feel myself fall. All I noticed was how my cheeks were flapping around. Then I felt myself falling again. Nope I did not enjoy this feeling. Falling and rising the first time was fine, but each time it happened again my stomach lurched a tad. Finally I was just hanging upside down waiting for the boat to come and get me down. My ankles hurt a little because the towel that was wrapped around them slipped off. When I was pulled into the boat I was weirdly calm again. The boat man told me how he was coming to Canada for a wedding soon. Next I spent ten minutes climbing a cliff to get back to the top where my new friends were waiting to hear how I felt. The whole climb up I wasn’t sure how I felt. That was fun, but shouldn’t I have experienced some life altering realization or something?

All of a sudden, I felt euphoric! I did it! Just as I had been planning for years. Go me!

When I got to the top I began to do a Rocky inspired dance back to my new friends, who surprised me with all of the photos they took. I felt amazing! 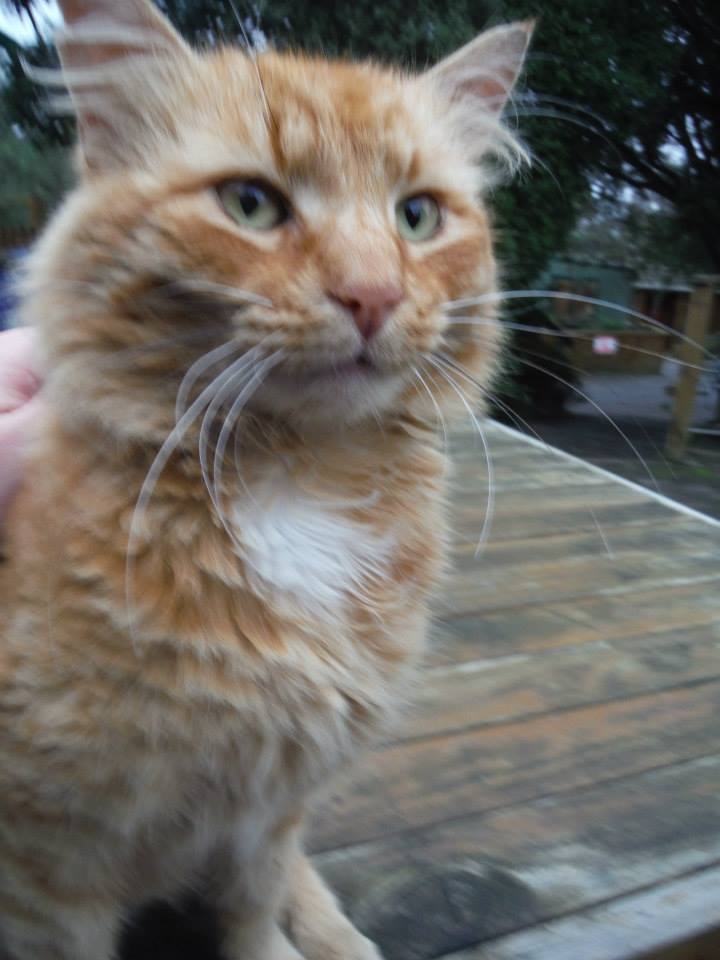 While waiting for my video to upload we played with a cat that lived there, and then went back to the hostel to tell everyone about my adventure.

I can’t wait to bungee again.

What You Need To Know To Go Bungee Jumping In Taupo, New Zealand

Aj Hackett, Taupo website. You have a few choices when it comes to your jump. You can jump solo, or tandem with an employee jumping with you. Also, you can choose whether or not you want to touch the water while jumping.

Have you ever been Bungee Jumping?
What is the craziest thing you have ever done? 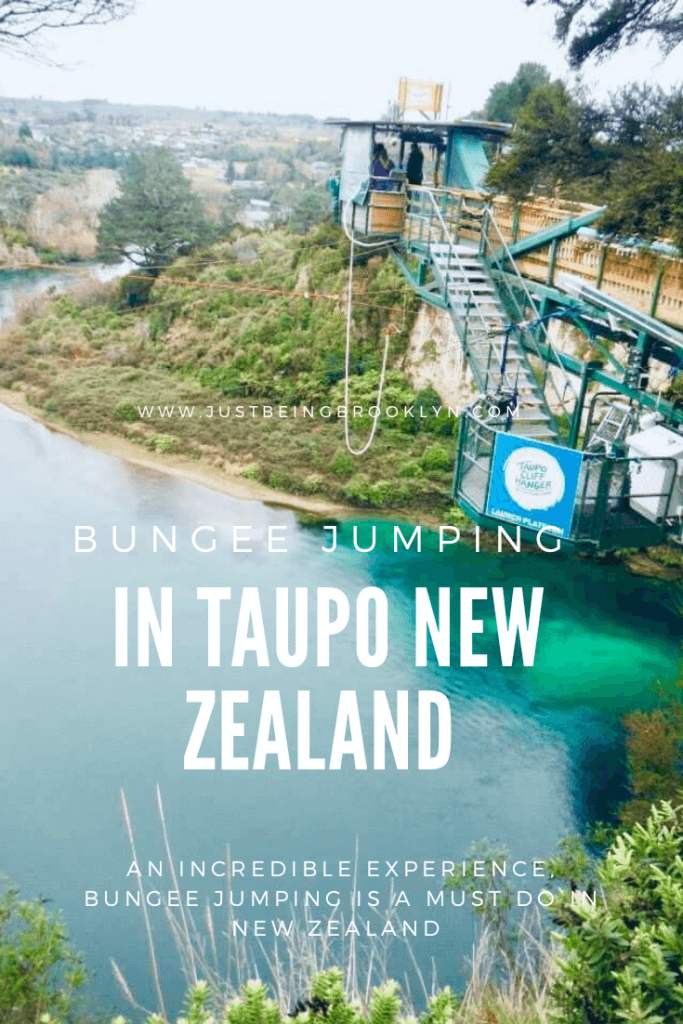 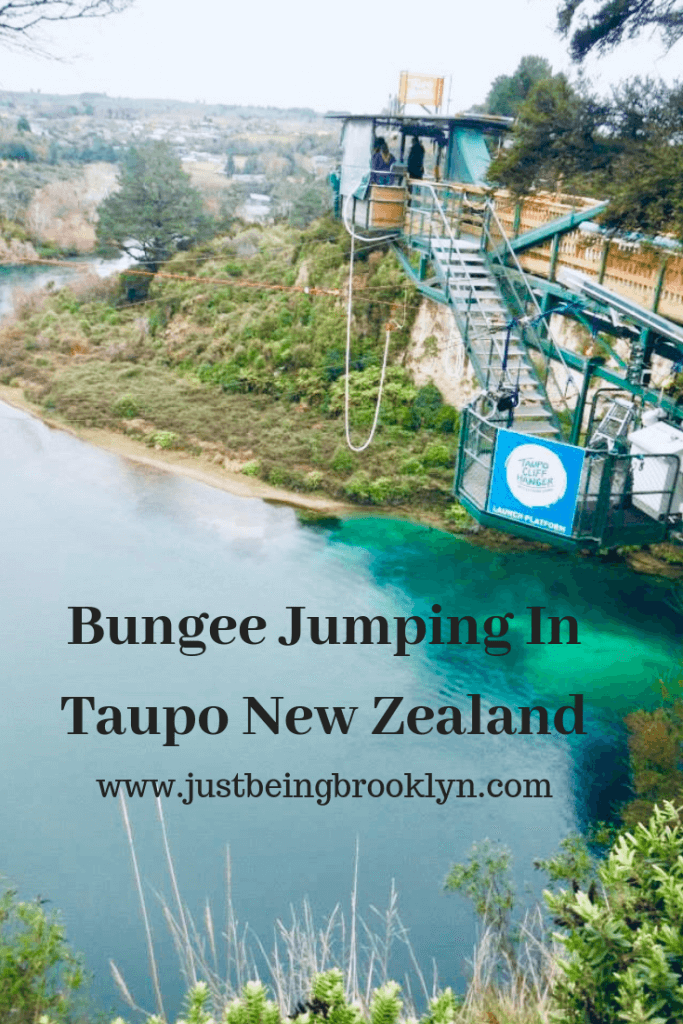