Back in June 2014, I went on a tour of the Daintree Rainforest up near Cairns, Australia. I went with an amazing company called Billy Tea Safaris. While the tour was expensive (as of 2018 the tour costs $205), I got to discover the Daintree Rainforest, something that I had never expected to do. To me, that is worth every penny.

The day started with a 7am pick up from my hostel and I was the second person to be picked up. Score for getting the best seat! The tour guide immediately began to poke fun at my name (all in good fun). Brooklyn as in Brooklyn NYC, and Murtaugh as in Lethal Weapon. If I’m ever in need of easy conversation, my name always helps me out.

After gathering everyone, we began the tour! The early morning was a blur of stopping at an adorable little shop for refreshments, and a gorgeous look out. But the main thing I want to talk about here was our first big event…a crocodile tour on the river! 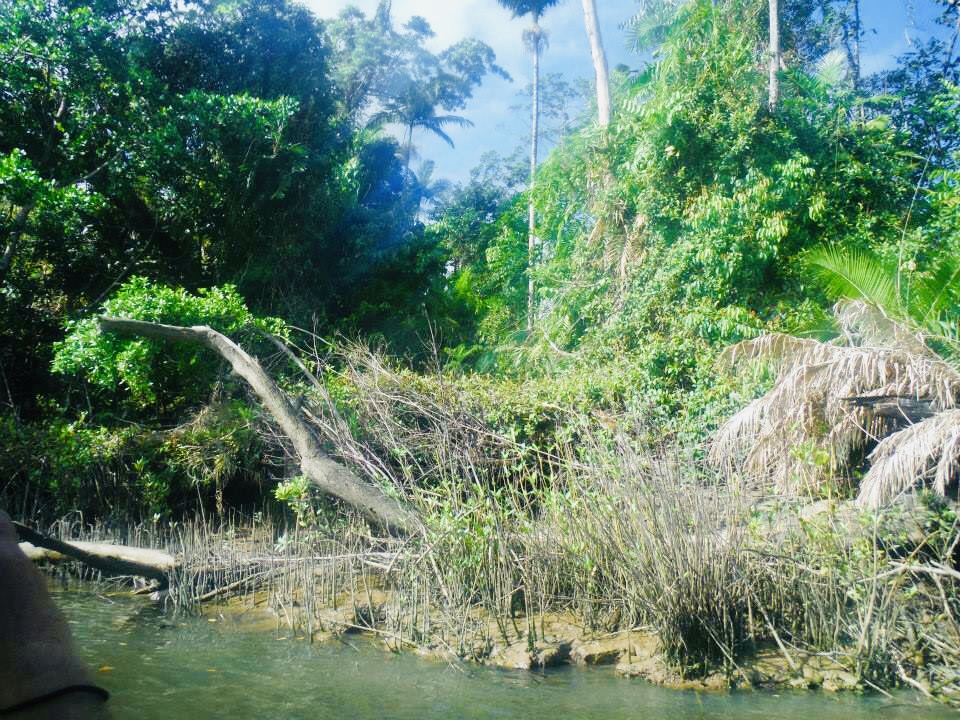 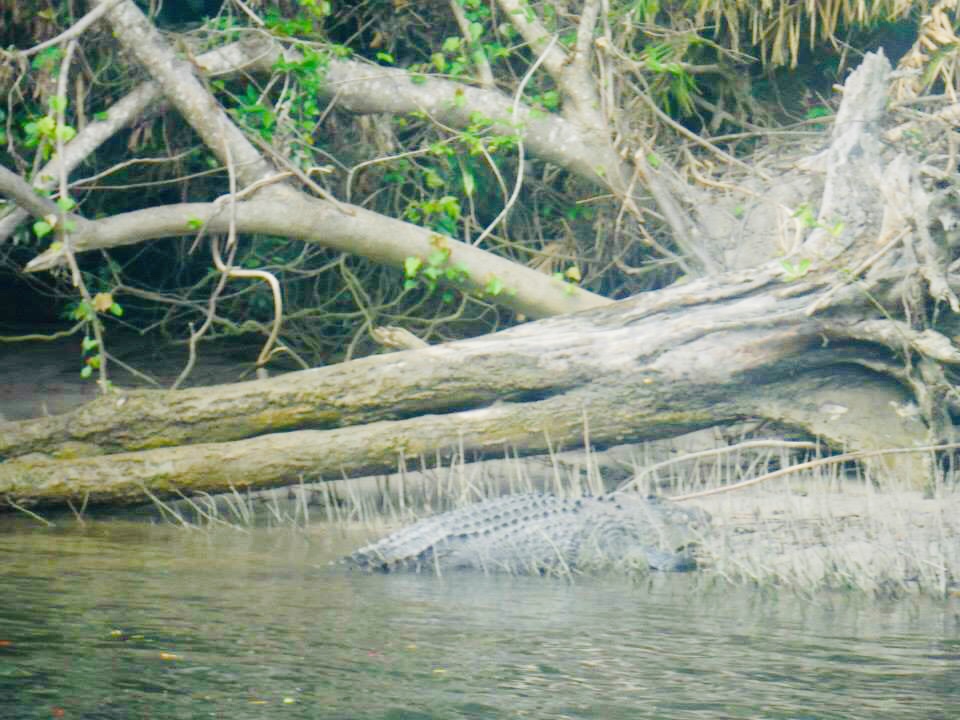 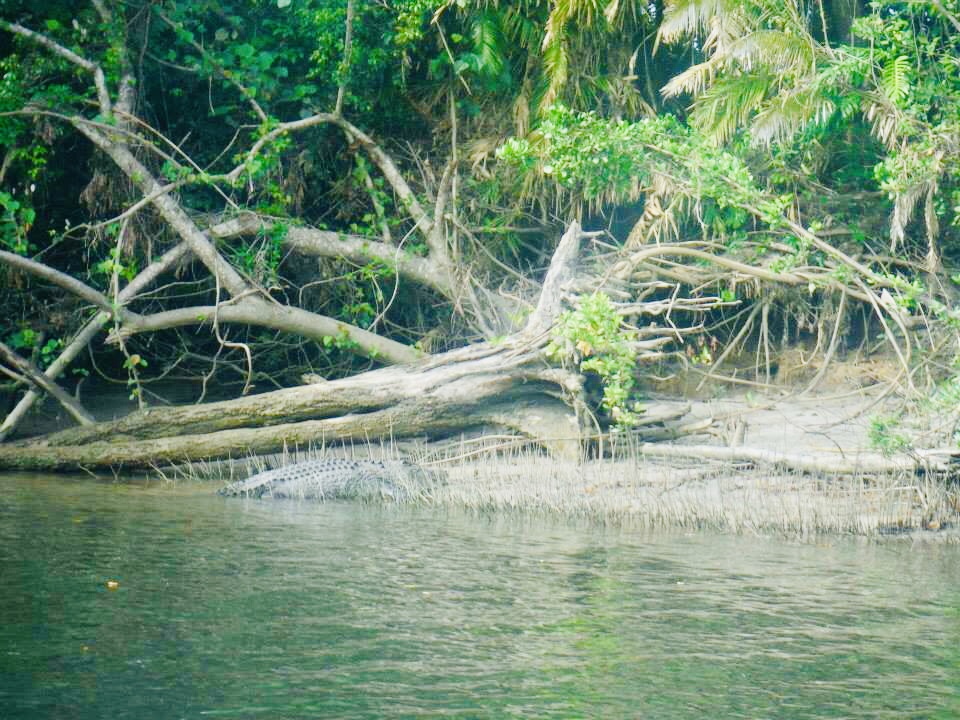 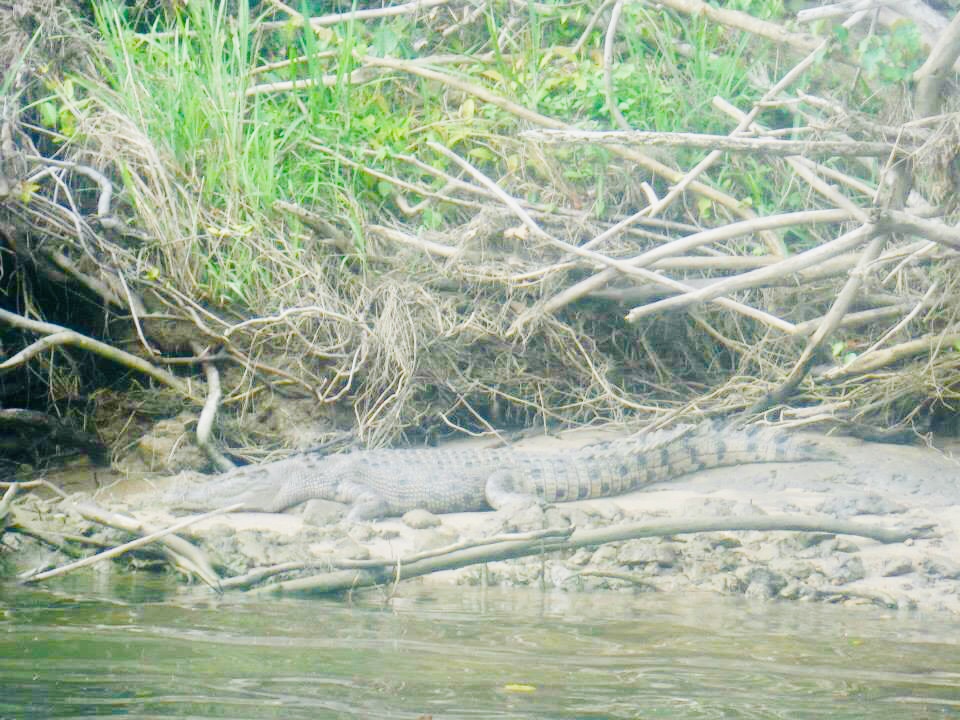 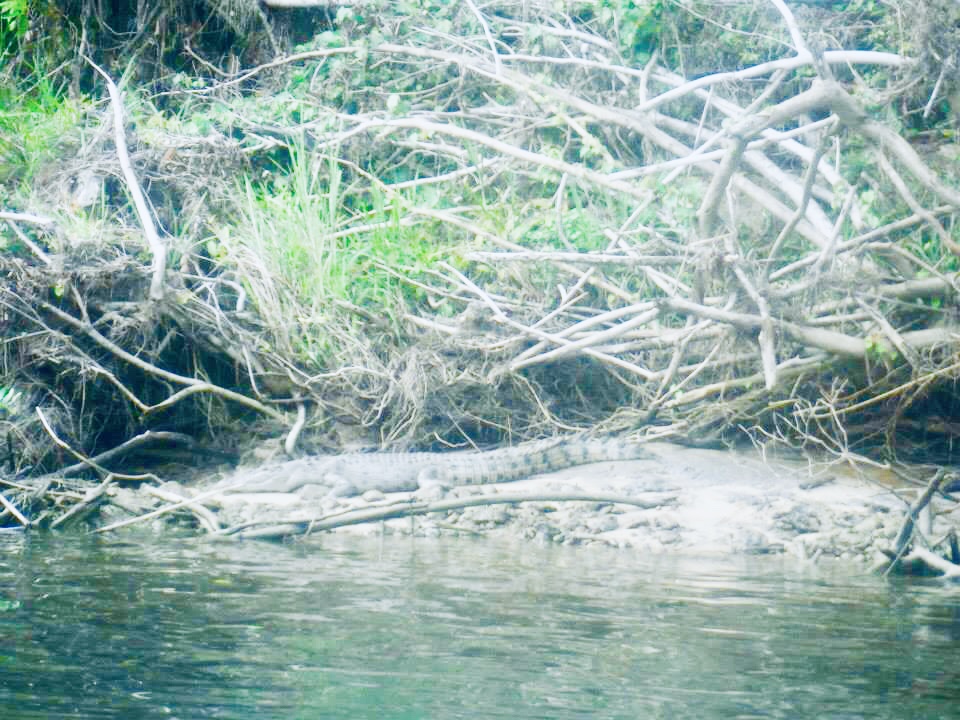 I am obsessed with crocodiles. If I wasn’t extremely loyal to the pandas I fell in love with as a child, I would say that crocs are my favorite animal…unfortunately for them, they have to remain in second place. This tour started with the option to pay $5 to hold a baby croc. At the time I resisted because I was so keen to get a good spot on the boat for the actual tour. Thinking back, I so should have done it. Damn it Brooklyn!

The boat held about 20 people, and our guide was simply the most knowledgeable man I have ever met when it comes to all things river. He was able to spot pythons way high up in trees that the rest of us would have needed binoculars for. He saw birds hiding, waiting to catch their prey. All of us on the boat would be watching the water, and then the guide would get excited and show us where to look. There were a few animals that I just never saw because they were too far off or blended in to the environment too well, and my eyes just aren’t trained to notice such things.

Never in a million years could I have eyes trained to see what he saw. It is kind of incredible that some people are able to spot such creatures and some of us aren’t. I guess that’s what happens when you live and work in the rainforest.

But the best part of all? The crocodiles, obviously! I only expected to see maybe two or three, but no, we were so lucky. We probably saw close to a dozen. Other friends of mine that went with different tour companies only saw one or two crocs. The extra money definitely paid off, to get someone as knowledgeable as our guide. He knew where to go and even knew the names and information on each crocodile. That’s what happens when they are kind of your co-workers. 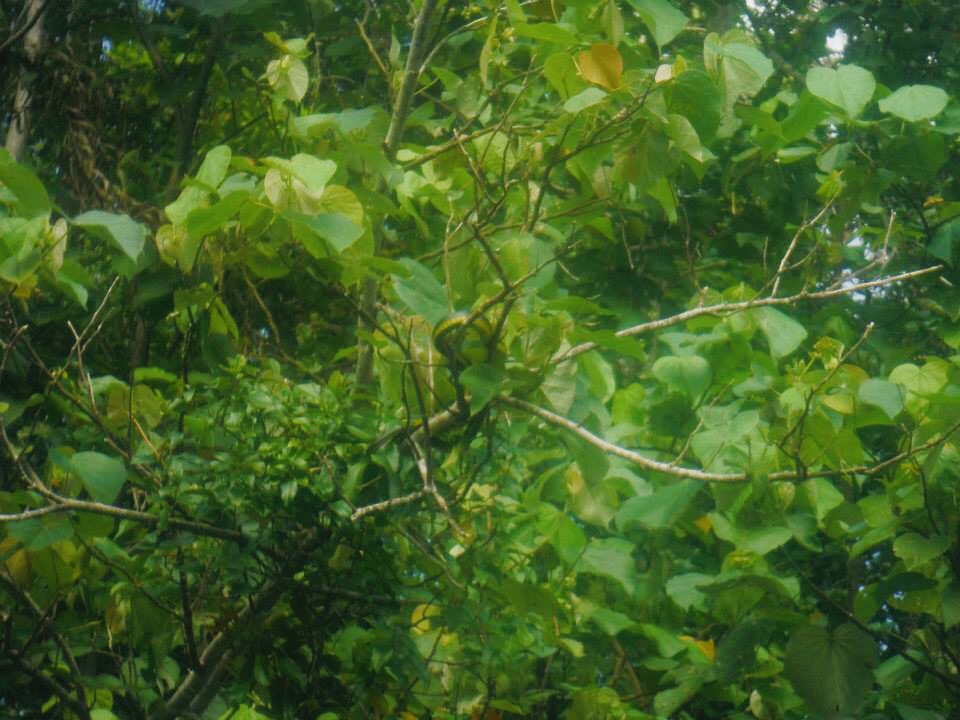 Do you see how well the green python blends in with the tree branches? Look closely, in the middle of the photograph.

The crocodile tour ended much too quickly for my taste. I could have stayed out there all day. Watching the crocs in their natural habitat was incredible.

After this tour, we stopped at a kangaroo farm for some lunch. No, we did not eat kangaroos. They BBQ’d steak for us, had HUGE portions, and provided tons of salads and potatoes. It was everything you could have wanted for a tour lunch. They went all out. The only downside to lunch was being surrounded by caged birds who shrieked really loud. Shudder.

While not eating we got to pet and cuddle some kangaroos. The cuddliest roo I’ve ever met lived there. He kept grabbing the owner and giving him hugs and cuddles. It was so sweet! 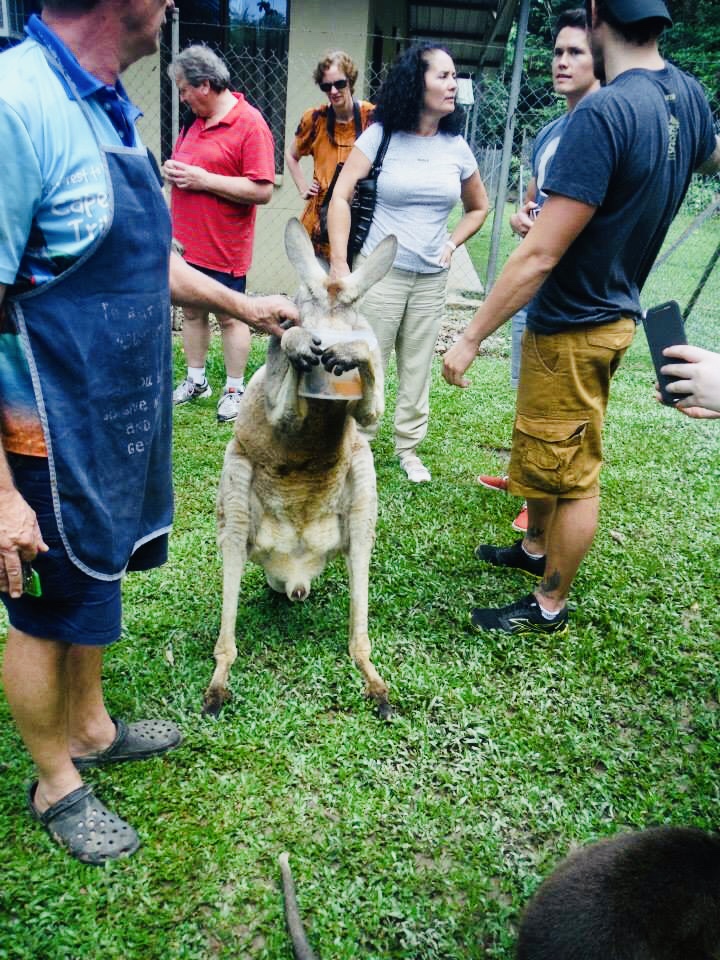 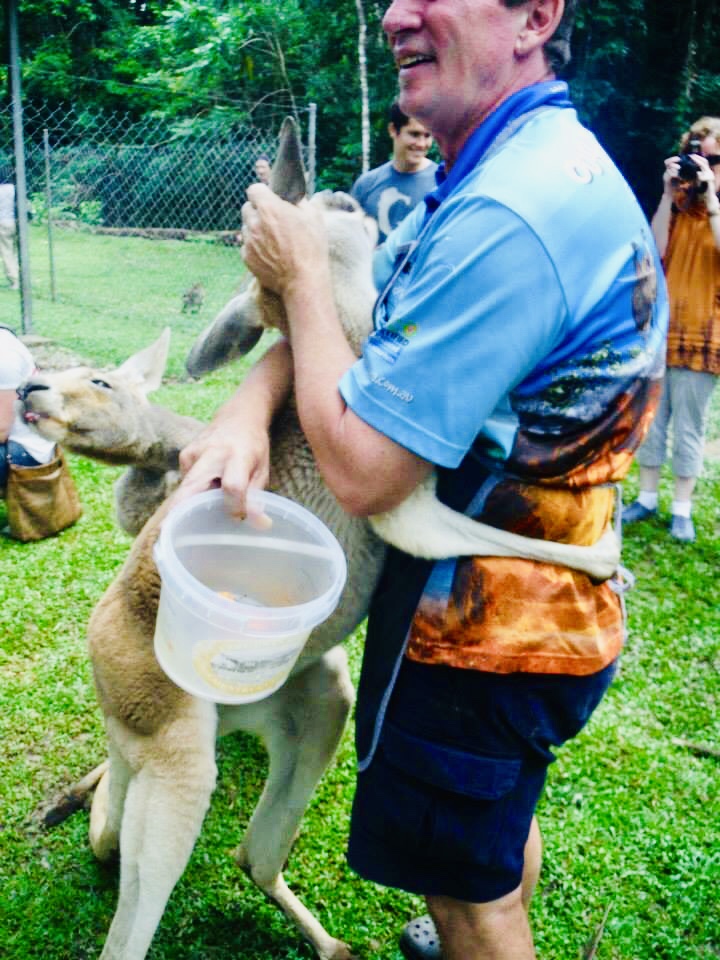 After lunch we went to a private creek for a swim. This tour company is the only company licensed to swim here. Not going to lie, there were a few “Warning, crocs” signs, so I was a tad nervous, but according to my tour guide that was just to warn off others from swimming there, if they made it that far into the rainforest. The water was freezing but so refreshing. I was the first in the water. 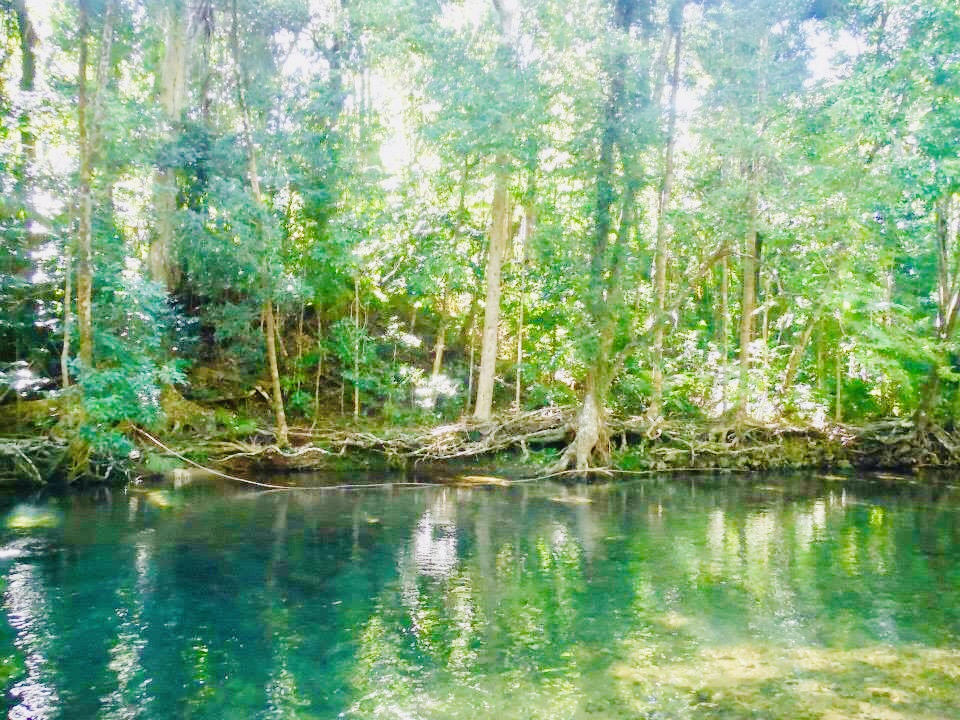 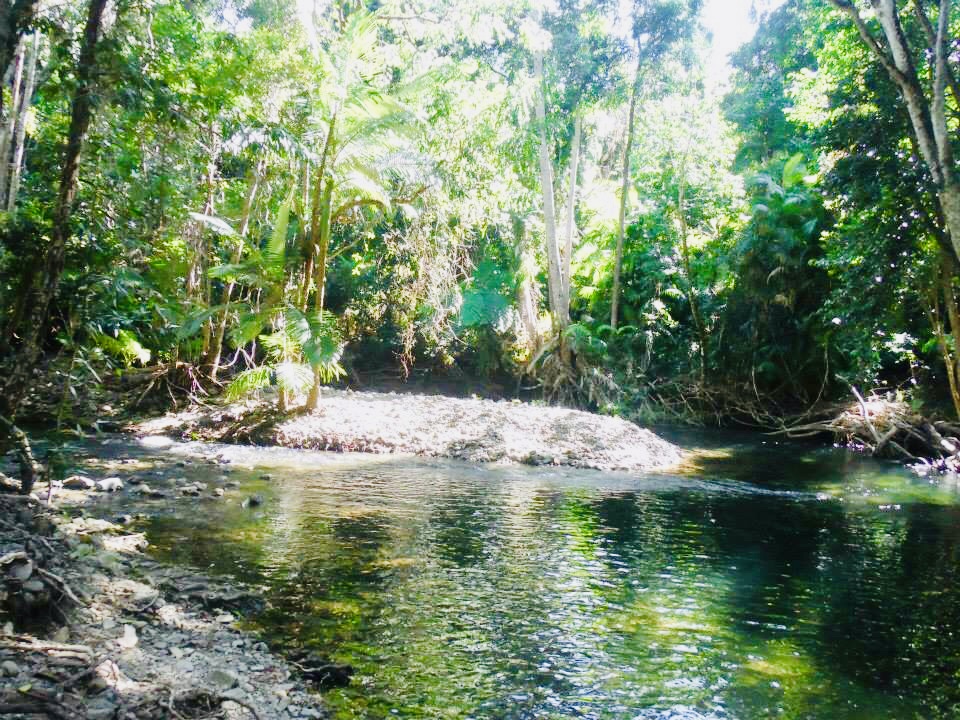 To finish off the tour, they made some Billy tea right on the fire! To stir it up he lifted the pot up and began swinging it in huge circles with his arm. It was so cool to see.

After leaving the creek we stopped in the popular Cape Tribulation for a quick stop. The beach was so beautiful, I can understand why people love to stop here. 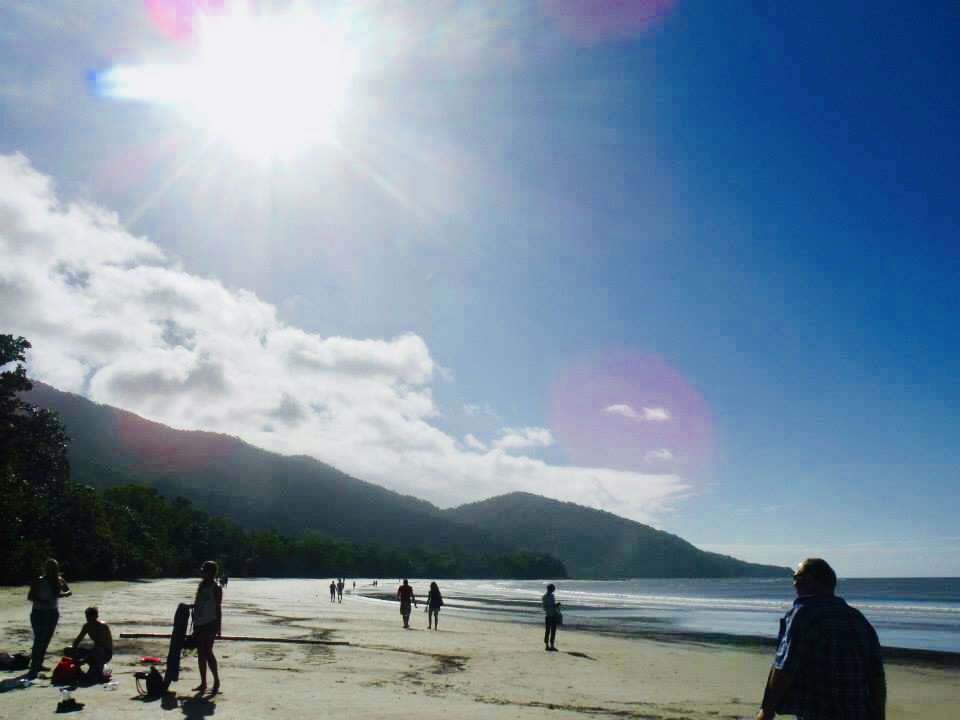 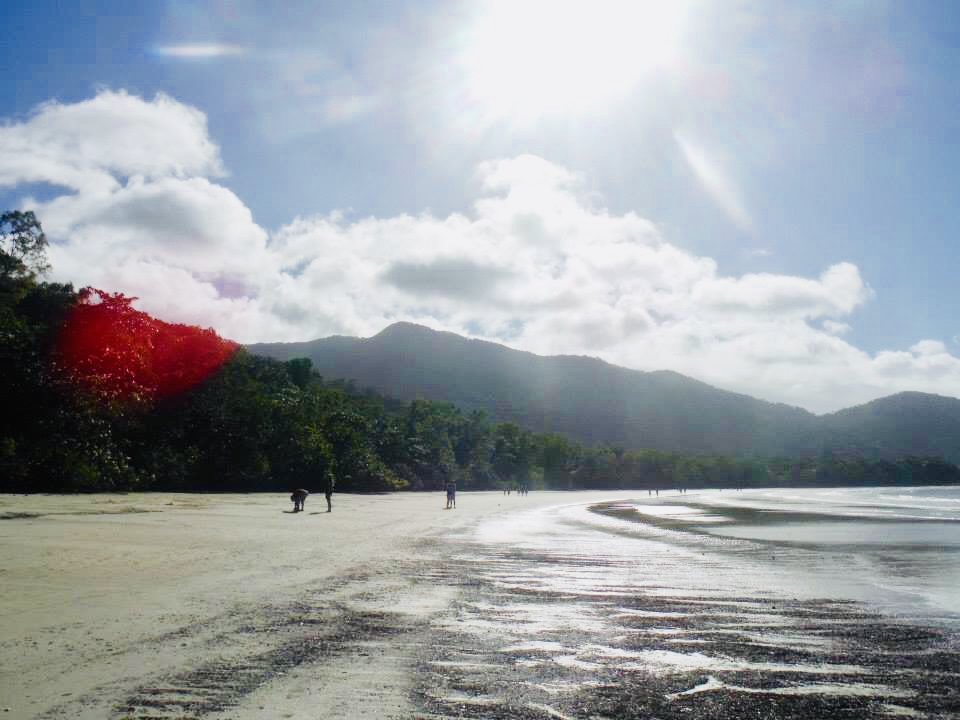 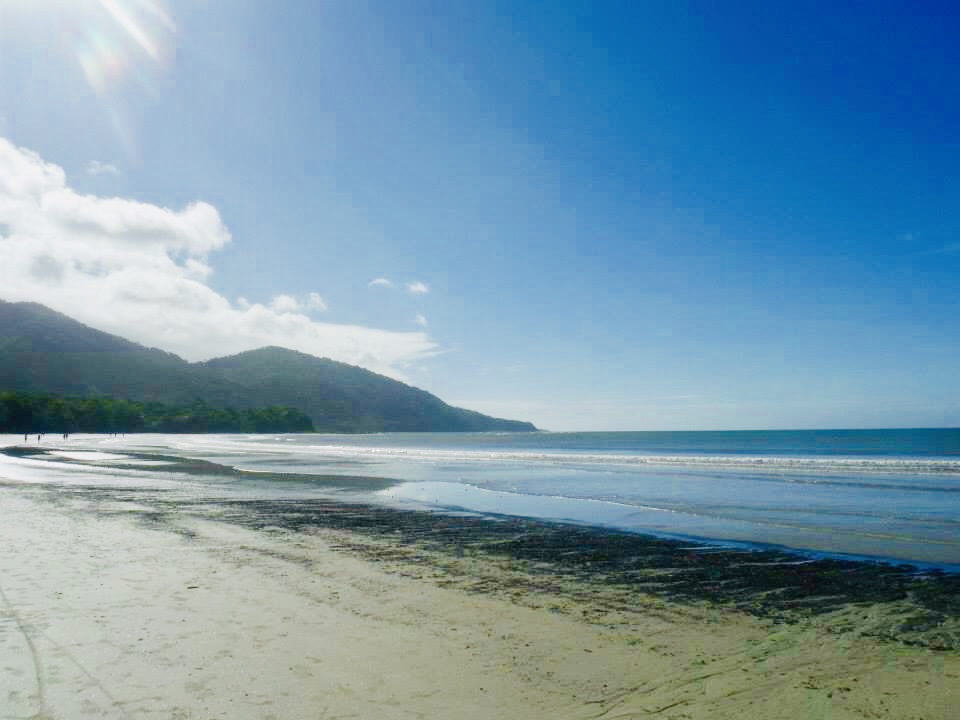 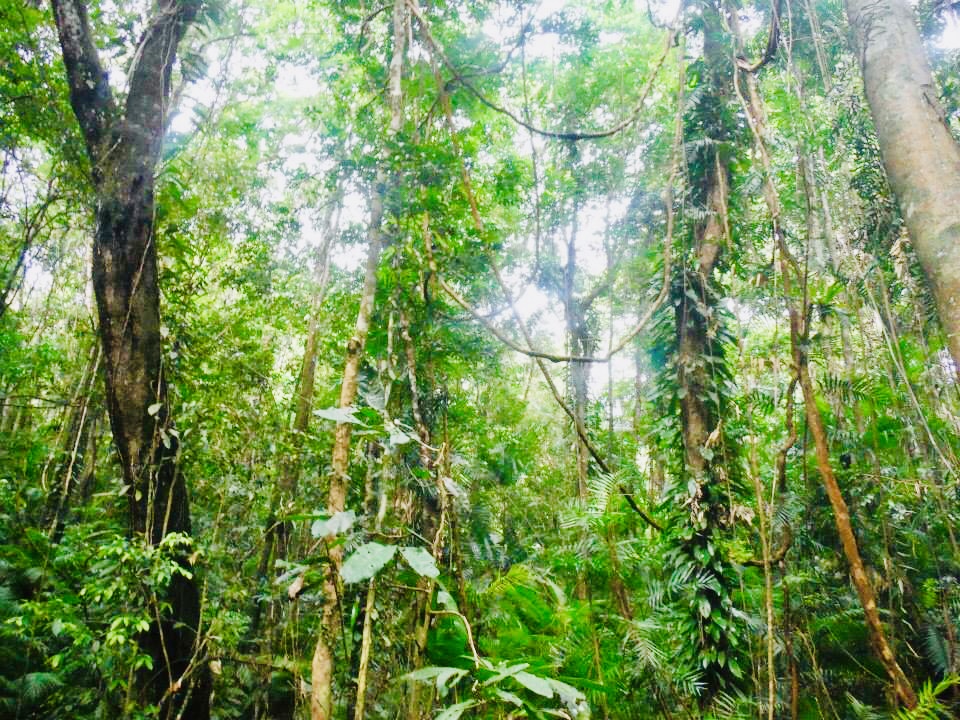 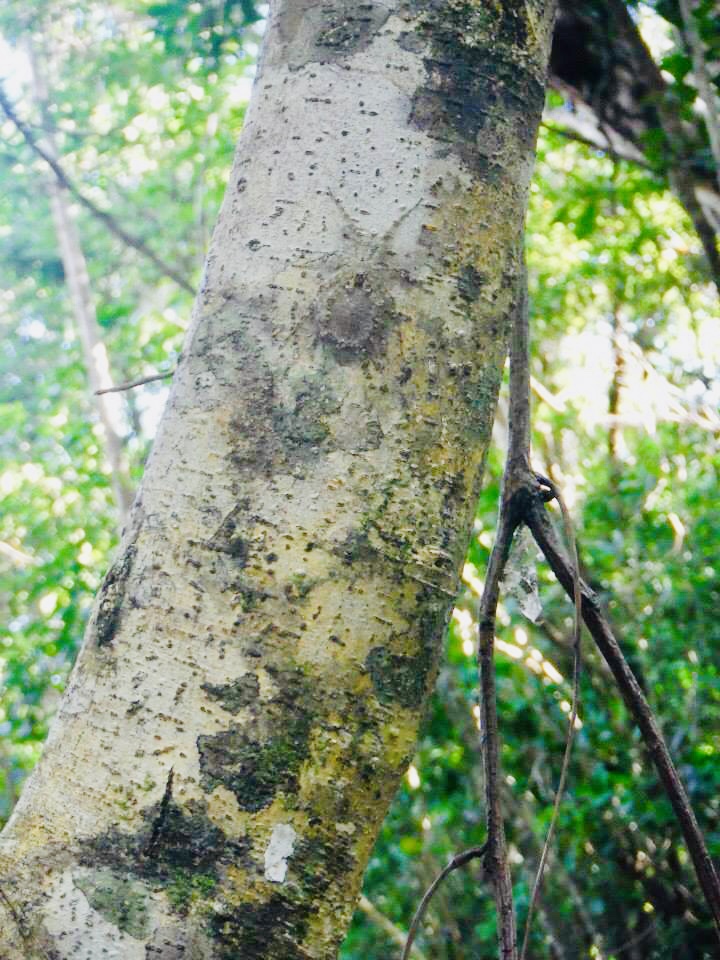 Do you spot the spider blended into the tree? A man had leaned his hand up against this tree, when the tour guide pointed out the spider he quickly jumped away. Can’t blame him!

On the way back to Cairns we made a quick stop to this tiny ice cream shop that I had heard about a few years before. Called Daintree Ice Cream Co, you pay $6, and are given a pre-made bowl with four different flavors…I was worried since I’m such a picky eater that I wouldn’t enjoy the flavors, but all flavors were so good. I just wish I could remember them all, though I do know that the flavors are grown from the fruit on the properties orchards, and change seasonally.

It was the perfect way to end the day.

Have you ever been to Australia?
What about the Daintree Rainforest? 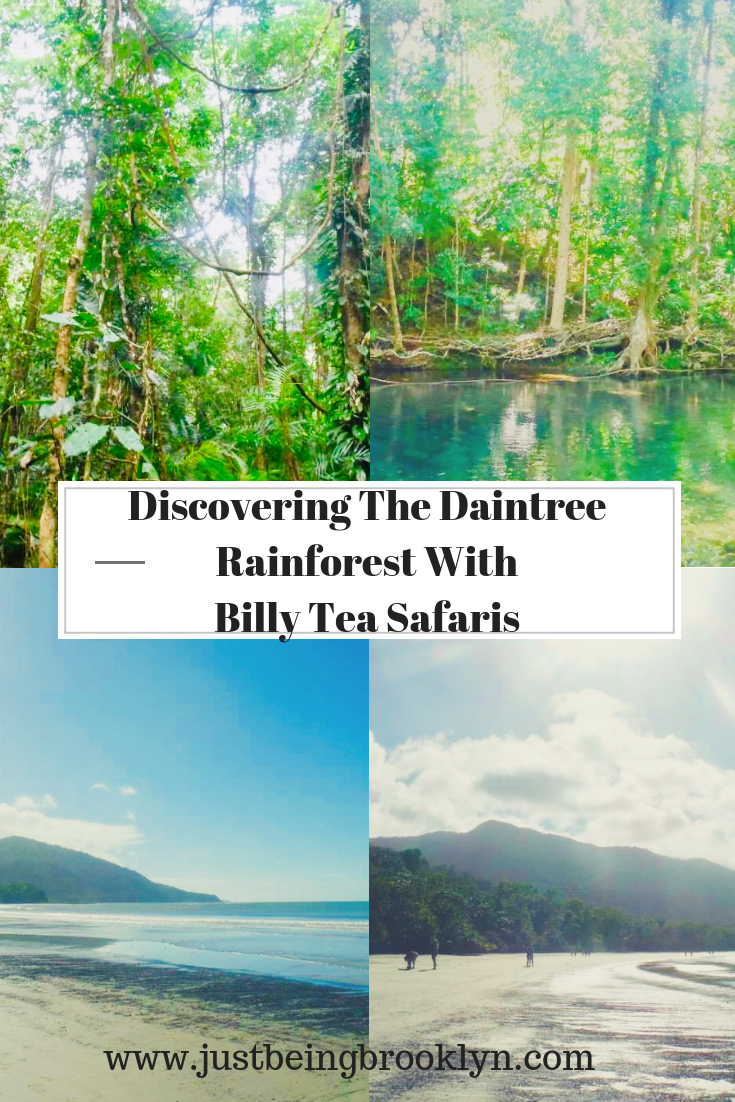