All I ever really knew about Tom Green was that we grew up in the same small town in Ontario, he was briefly married to Drew Barrymore, and he was mentioned in Eminem’s song “The Real Slim Shady”. The basic stuff.

I also knew that Scott loves him, used to listen to his radio show, and has some of his music/DVD’s or both. I’m not totally sure.

So when we found out a year ago that Tom Green was going to be performing literally a one minute walk away from our apartment, we knew we had to go!

Scott purchased tickets from Yuk Yuk’s (where Tom Green was performing for about 75 people) in January. It was a little sketchy because we didn’t receive actual tickets. The manager at the comedy club just told us to keep the receipt and she would write our names down in a book.

After waiting 11 months, the day arrived! 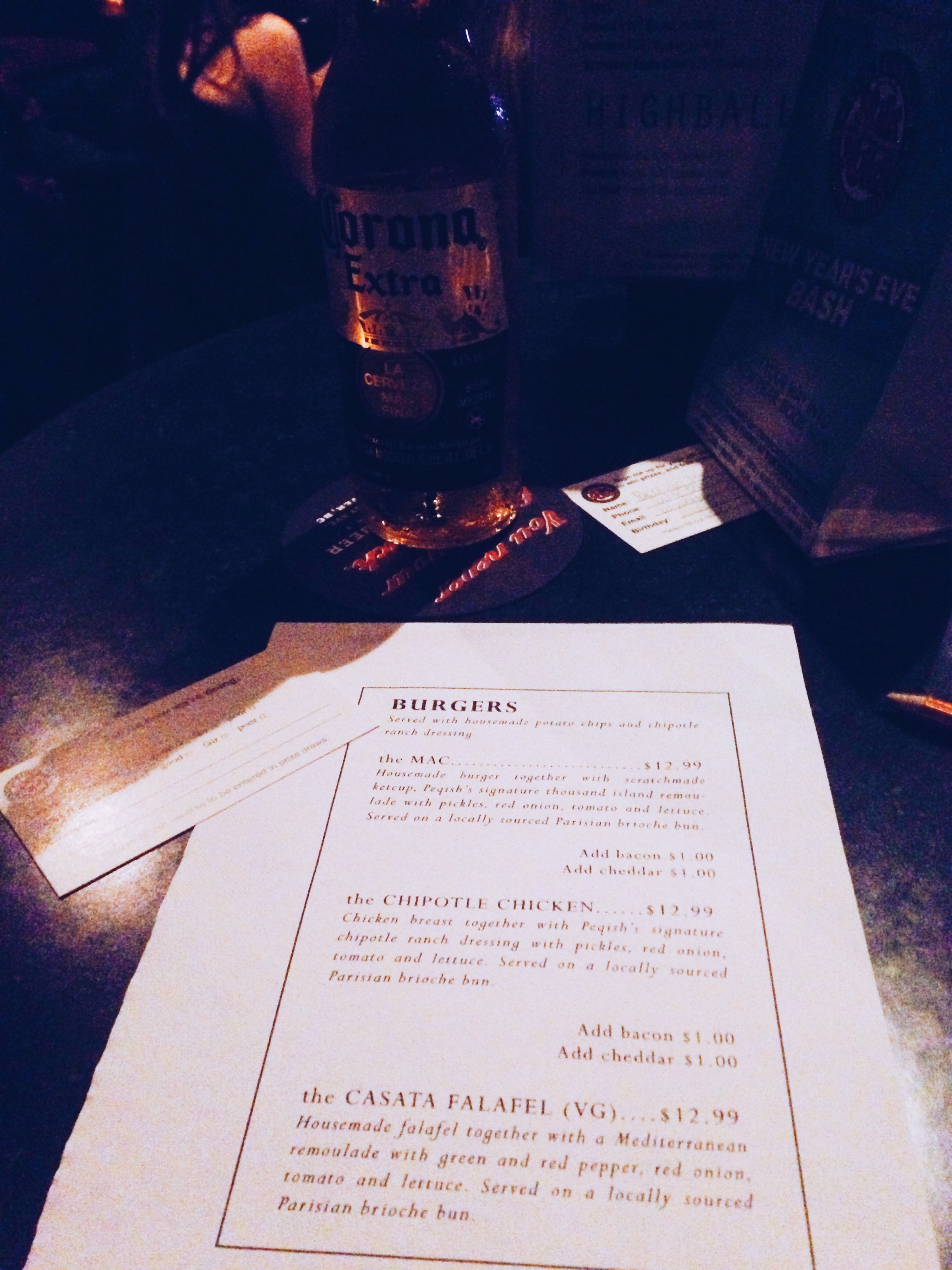 We arrived at the comedy club just as his earlier performance was letting out. It was really cool to see that instead of taking a break, Tom was spending his hour break hanging out with fans that had just finished watching the show.

As I had worried about, our tickets were nowhere to be found, but the lady at the ticket booth gave us tickets anyways. The show was sold out, so I’m sure they had two extra tickets because they were ours, even if they didn’t know where to find out names.

Whenever we go to Yuk Yuk’s, we always make sure not to sit at the front. I love witty banter with people, but I don’t want to be teased at the show by the comedians because I’m seated up front 🙂 We somehow got the PERFECT seat. It was a booth at the back wall, maybe 30 feet from the stage (it is a very small space), so we had comfy seats and were directly in front of him. So we didn’t have to turn our heads in any uncomfortable positions. Score!

We each ordered a beer, my first ever Corona, and we ordered a candy dish to share. I had wanted to take a photo but by the time it arrived the show had started and it was too dark. But let me say, that candy dish was awesome! 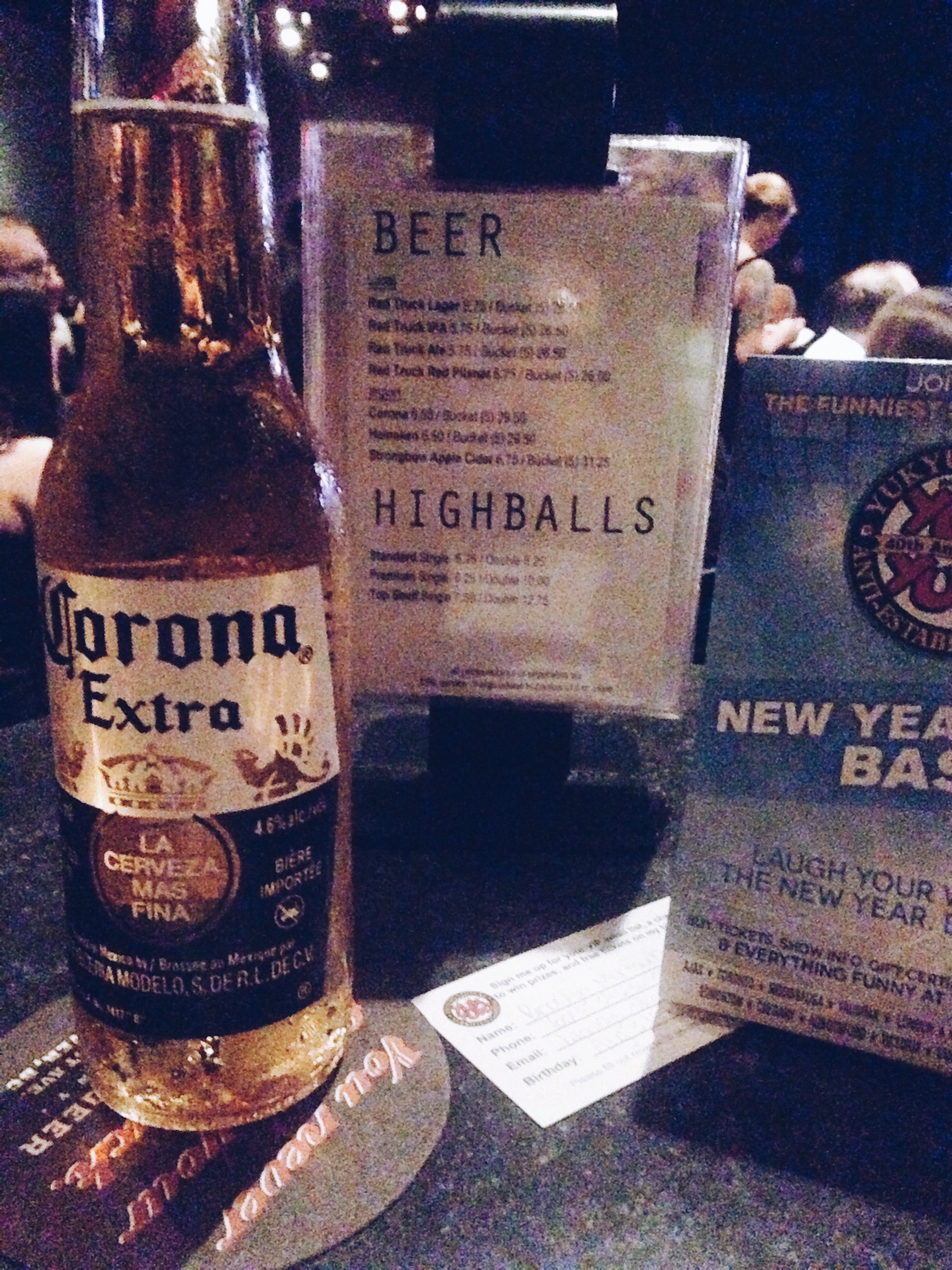 I loved the show opener for Tom. I can’t remember his name but I laughed out loud a few times. (Side note, I am apparently a comedians worst nightmare. It takes a lot for me to laugh out loud, even if I find the jokes funny. I guess I just laugh in my head.)

When Tom came on everyone cheered. The crowd was mostly older, and I was by far the youngest in the audience. Tom Green was at his highest when Scott was younger, so Scott loved the show. For me the jokes were a little old for me and I didn’t really get them. 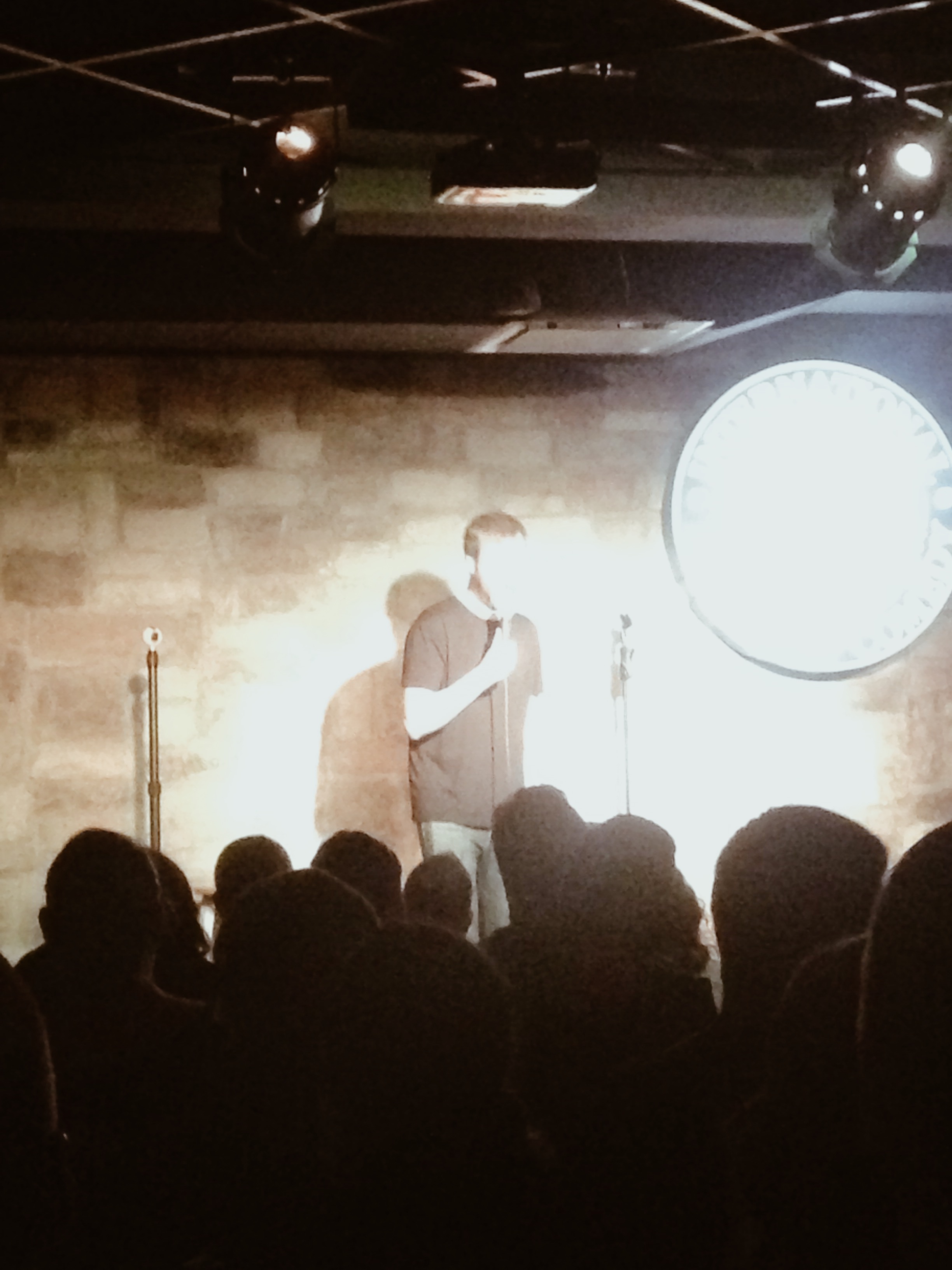 I promise he does have a face! The lighting made it really hard for good photos!

Tom was mostly discussing his previous years, movies and jokes, so I was lost most of the time. Either way though, I still enjoyed the show!

Afterwards we all had the opportunity to meet Tom Green.

He was incredibly nice. Probably one of the nicest celebrities that I have ever met. Well, him and Gerry Dee, another comedian.

I told him that I was from Petawawa, and he told me that he is also from Petawawa, and I said I knew that. I think he was amazed that another person knew that Petawawa existed. I had my boyfriend taking photos. He is not meant to be a photographer, let’s just say that haha!

I got some great ones of him and Tom Green though!

Afterwards we went for a short walk, then went home and ate some nachos. Perfect way to end the night I think!

How about live comedy shows? 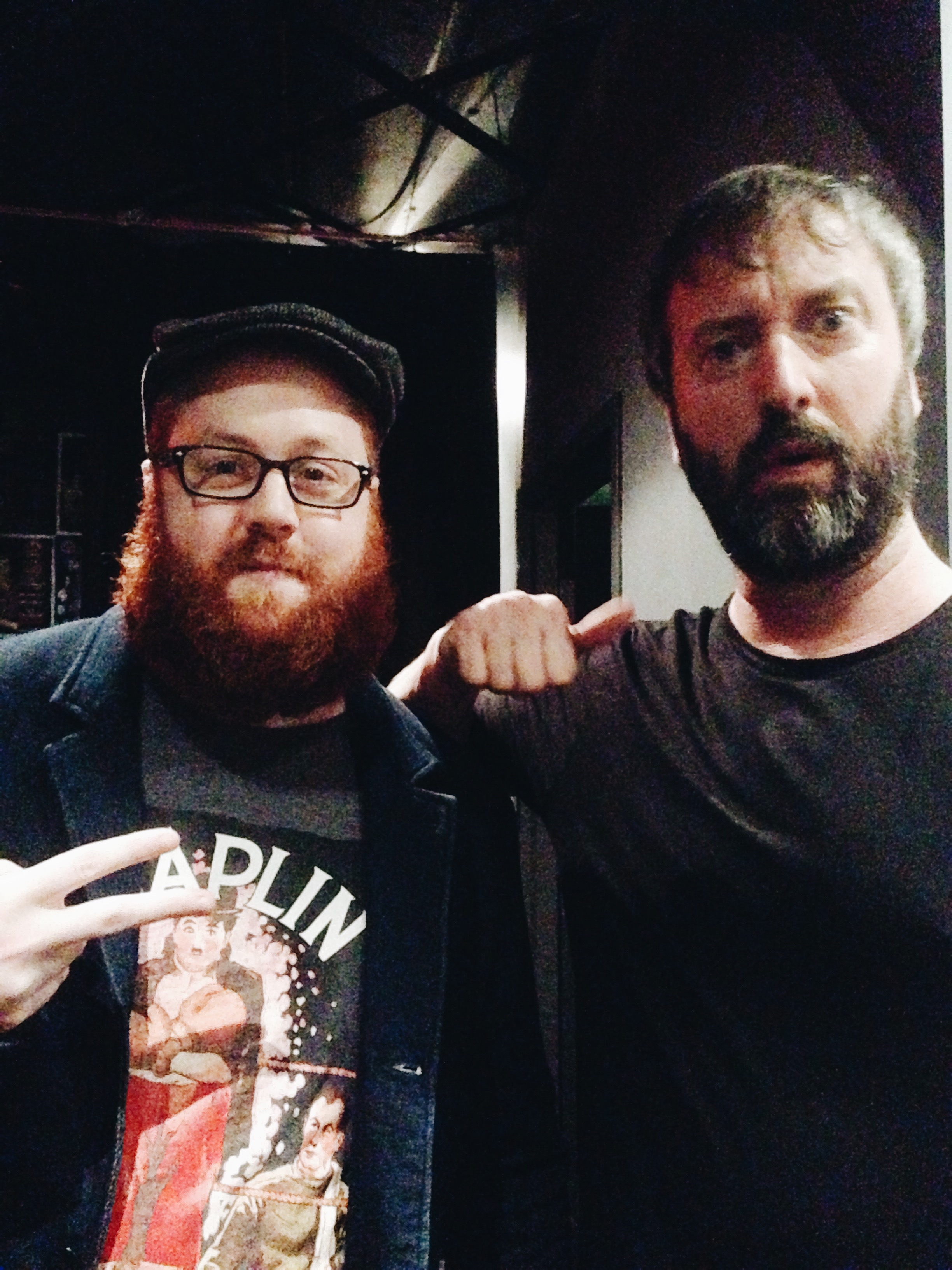 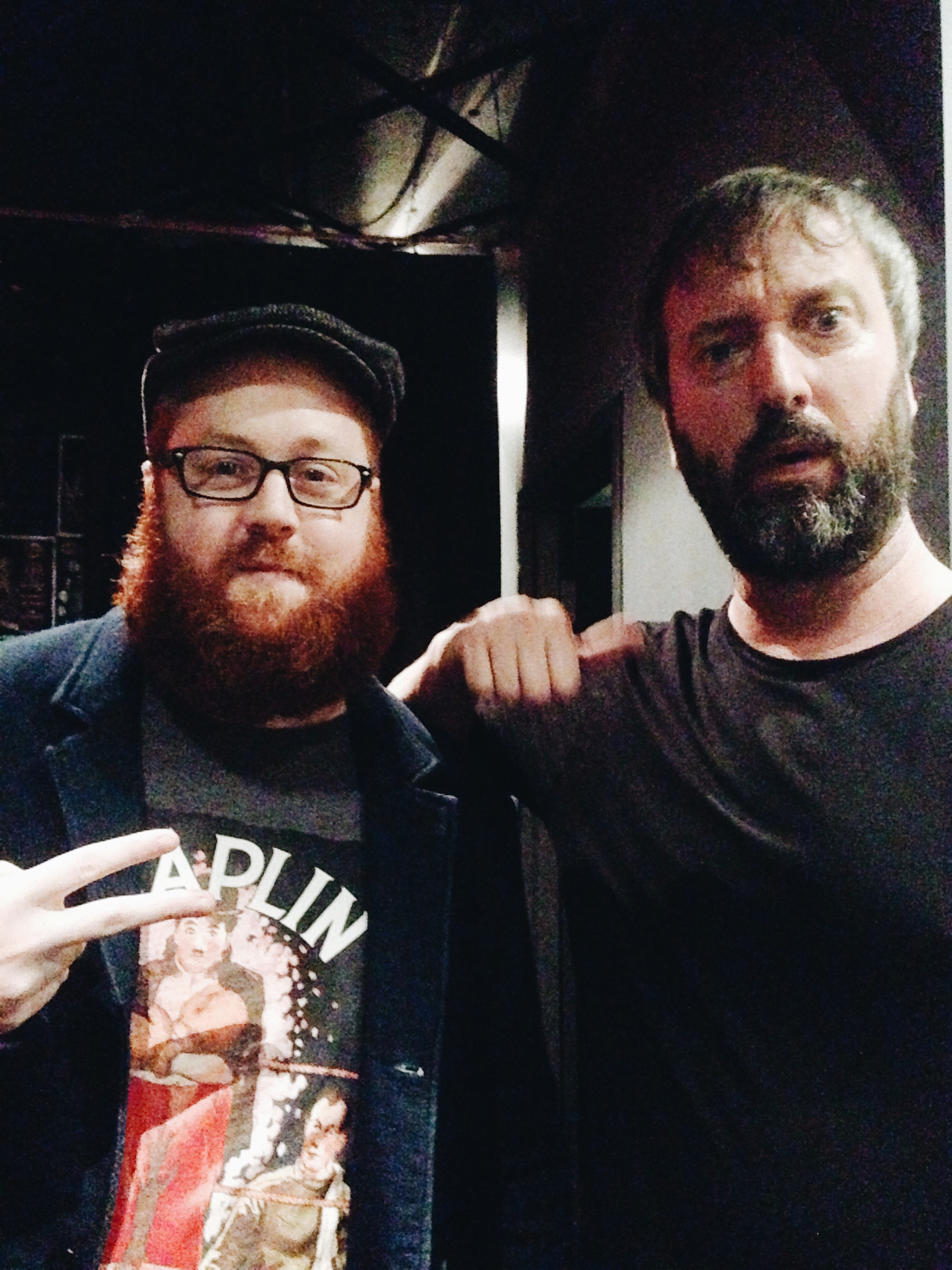