Stepping back into Canadian History – Engine 374 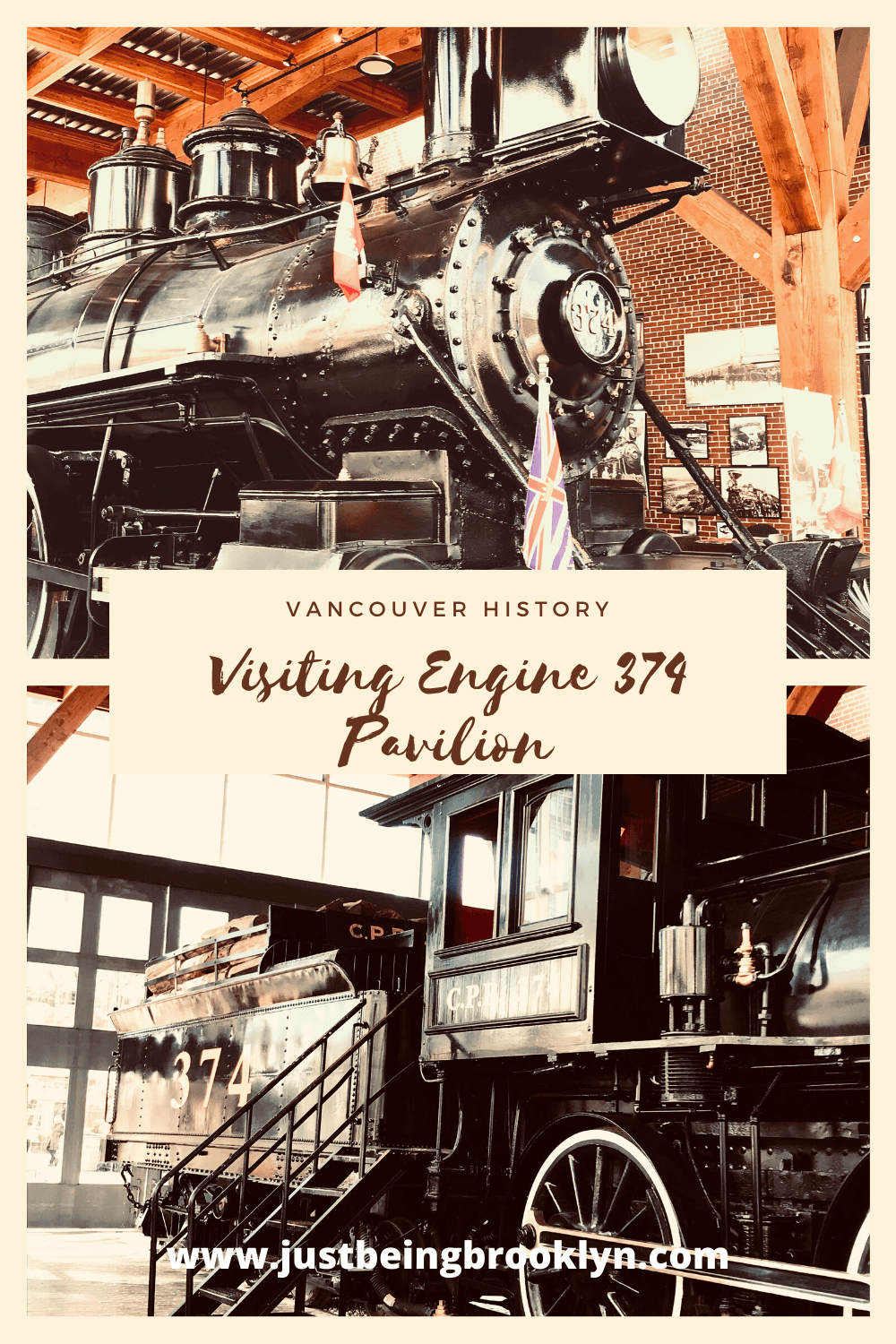 Lately I’ve been on a bit of a quest to experience more of Vancouver. I’m usually focused on researching destinations around the world, planning trips for years to come. But by doing that, I miss out on so much of the city I’m currently living in. Vancouver is a popular tourist destination for many visitors looking to discover Canada, or fellow Canadians looking to explore more of the beautiful west coast.

My goal for the next few years is to do more things in the city and areas surrounding Vancouver. There are so many incredible events that Vancouver hosts, and plenty of places that are open year round.

One of the great things about working as a nanny is that I get to bring kids to lots of different places and activities, one of which is the Engine 374 Pavilion. 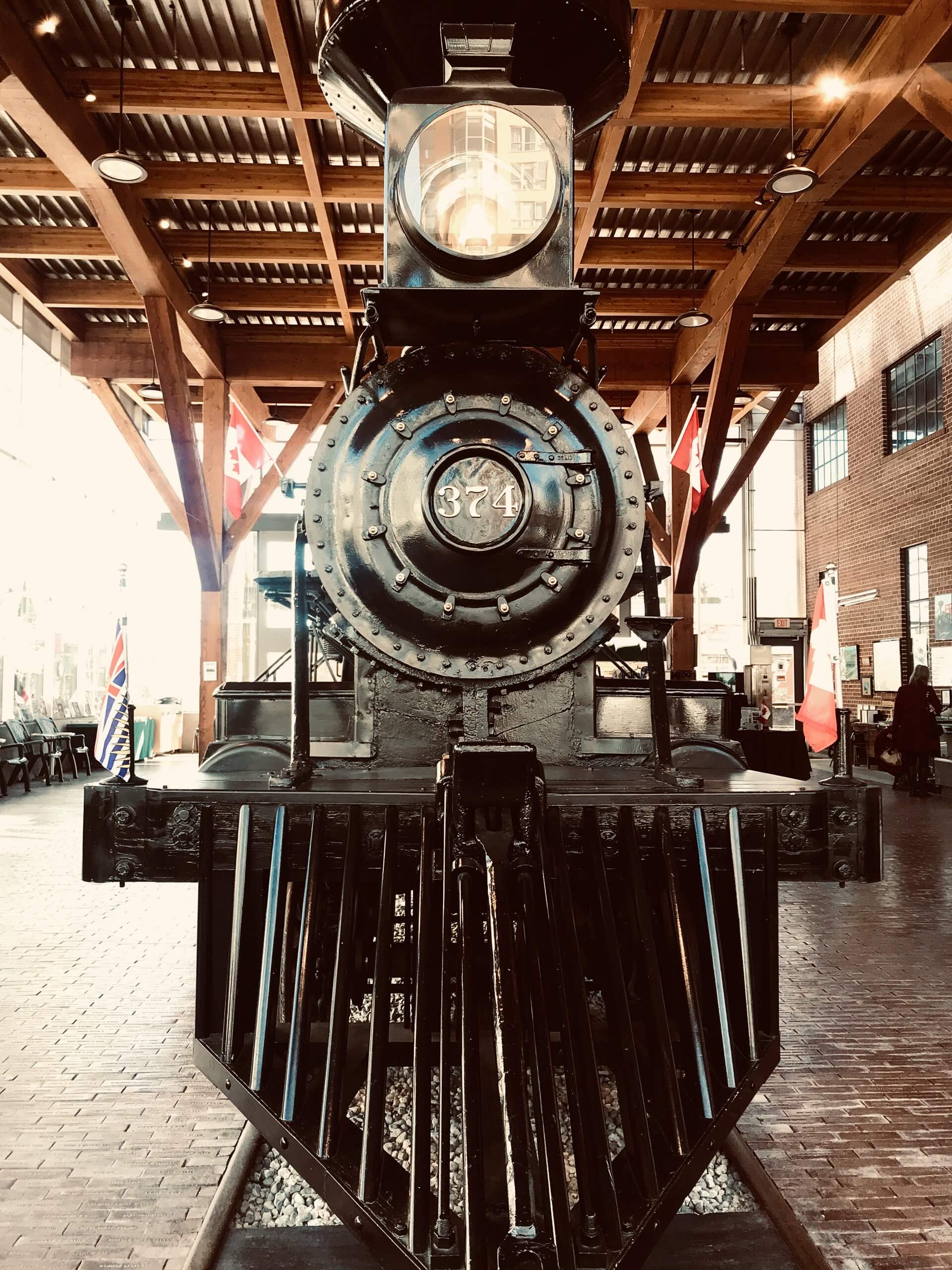 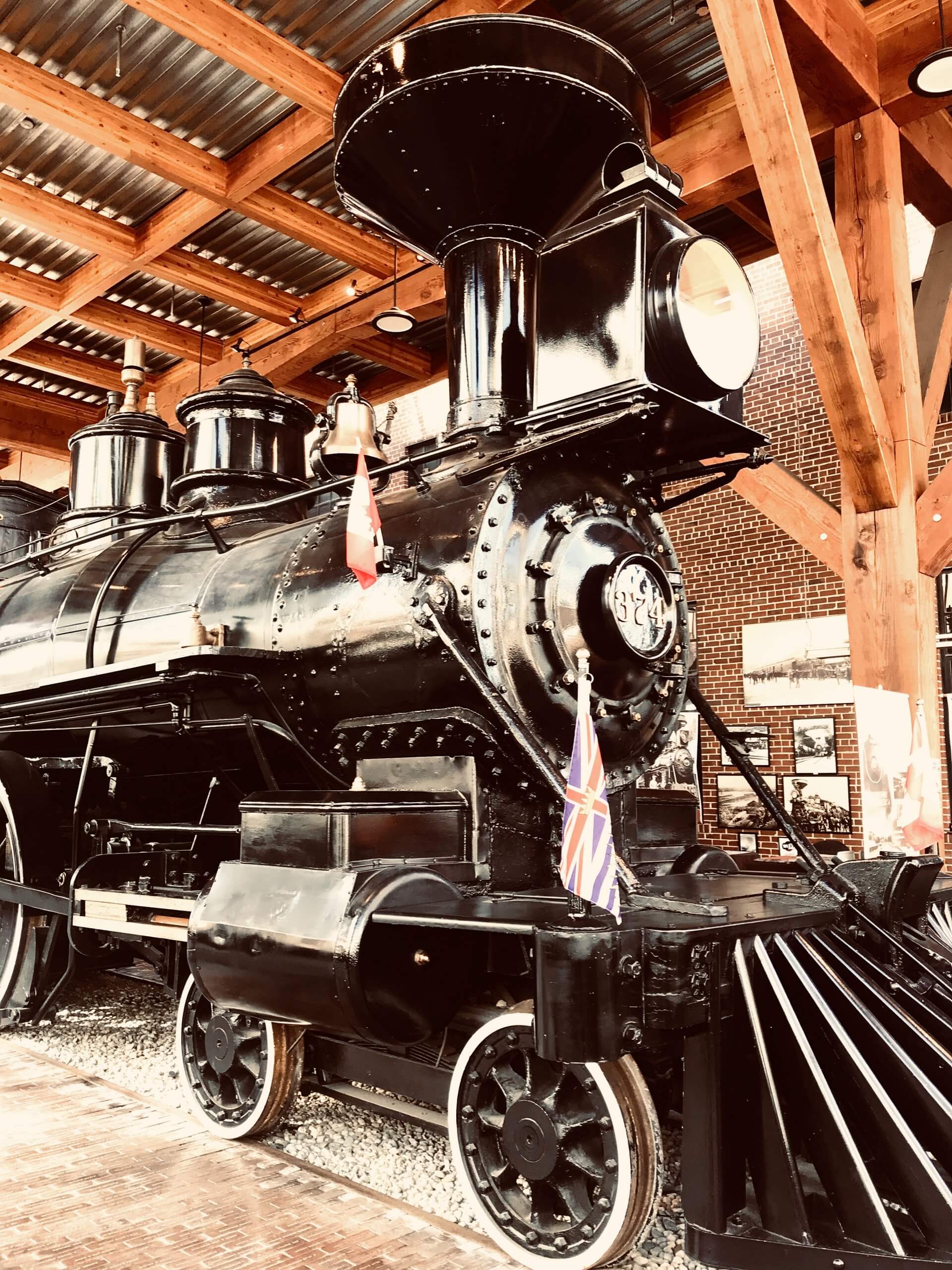 What is the Engine 374 Pavilion?

The year was 1871. Vancouver was not yet an official city, but due to European settlers in the country, Canada needed a railway to connect the east coast and the west coast. John A. MacDonald was the Prime Minister and saw this railway as being essential to having a unified country.

On May 23rd, 1887, CPR (Canadian Pacific Railway) Engine 374 became the first transcontinental passenger train to arrive in Vancouver! This is historic because previously it would take 4 months at sea to get from one end of Canada to the other. 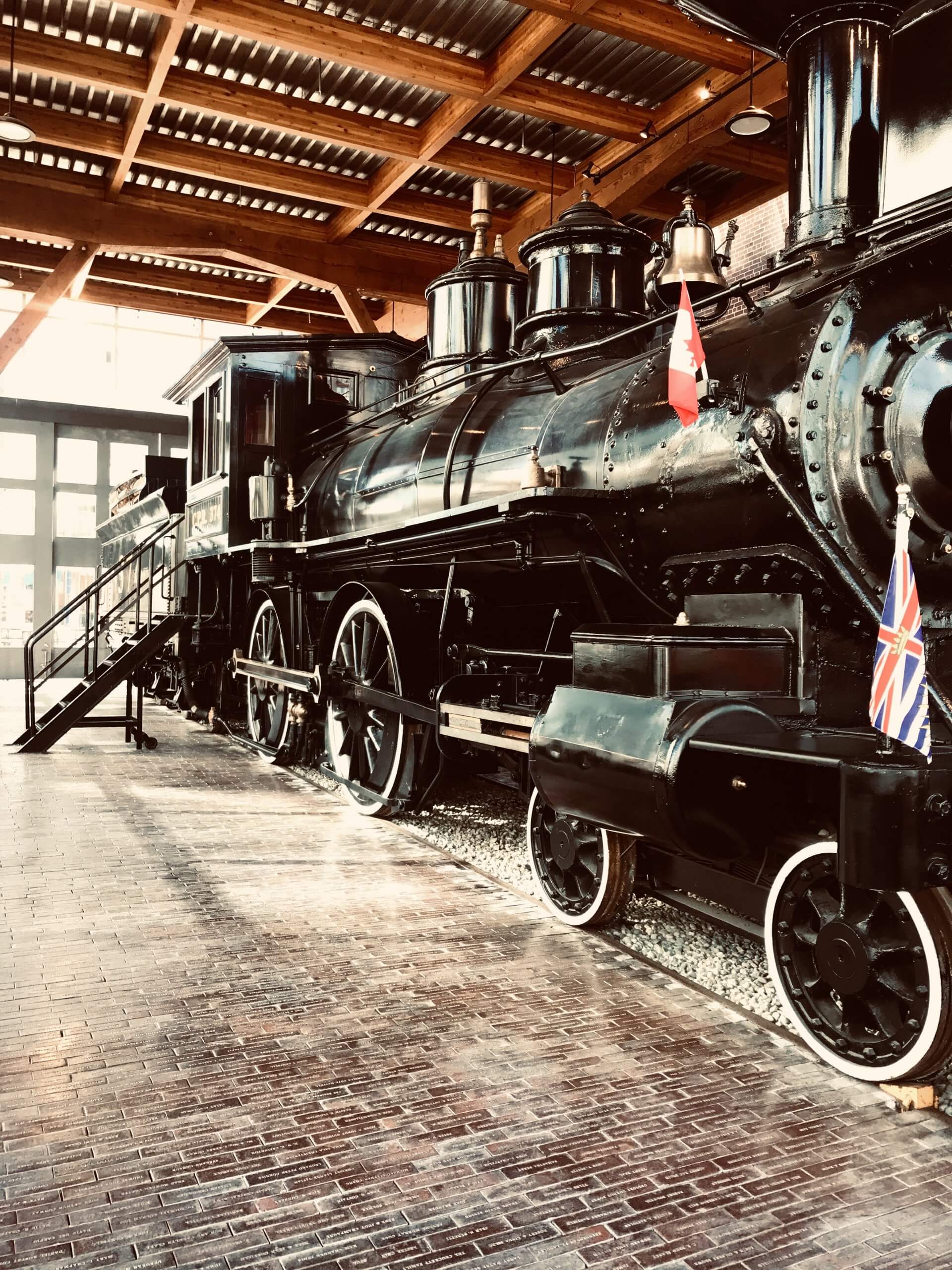 On the corner of Davie St and Pacific Boulevard, right next to the Yaletown-Roundhouse community center.

Before doing research on Engine 374, I had no idea how important the location was. The location of the pavilion is significant because when work on the railway began, the railway workers moved from the small village of Yale, located in BC’s Fraser Canyon (Fraser Canyon was important as it was enroute to the Goldrush), and settled here because the railway moved the repair shops and the construction equipment to Vancouver.

Now Yaletown is a trendy neighborhood in Vancouver, with loads of shops, art galleries, high rise buildings, and parks. 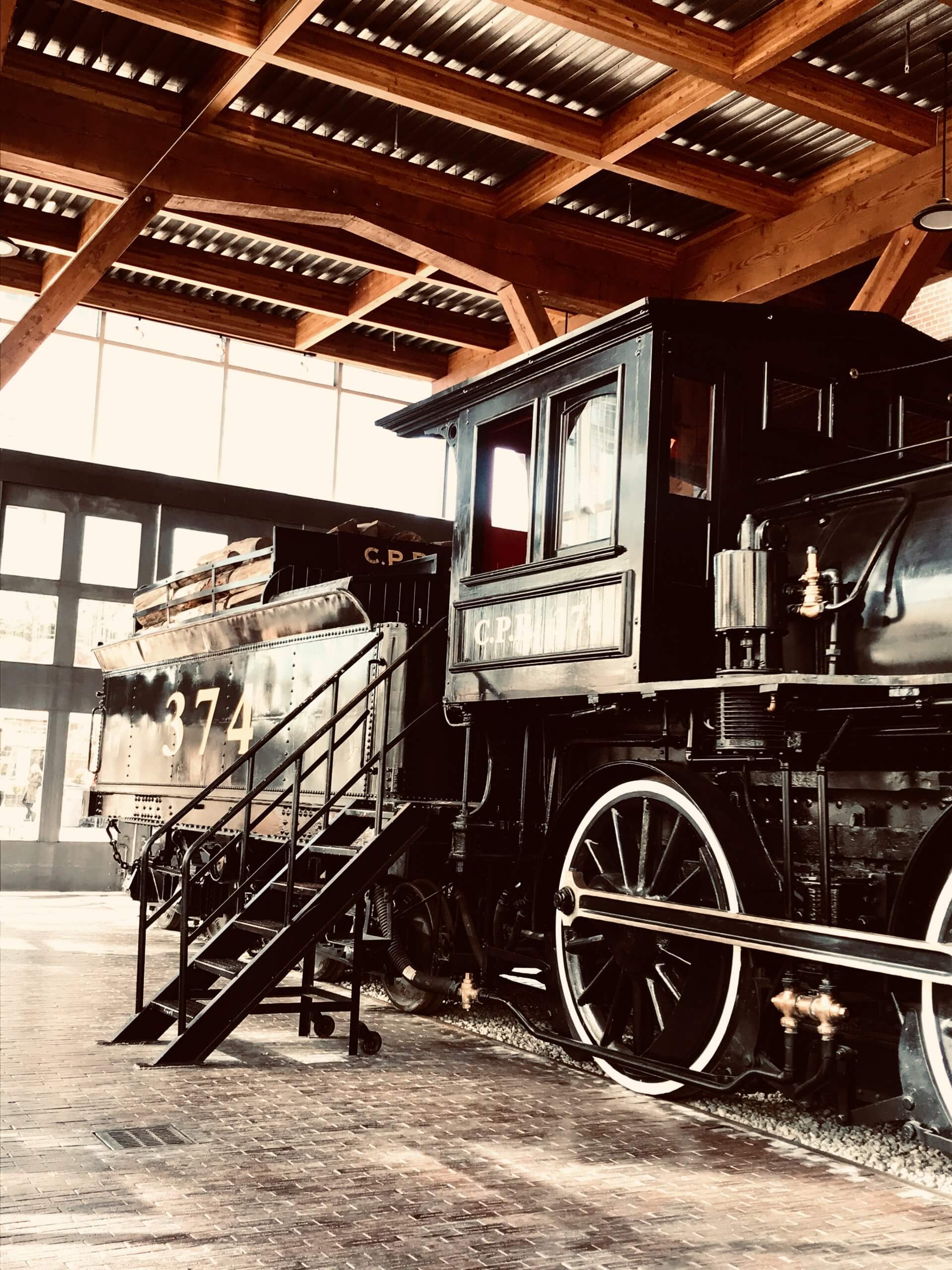 After 58 years as a passenger train, Engine 374 retired in 1945. Originally donated for show in beautiful Kitsilano beach, the train took quite a beating from vandalism, kids playing on it, and just being ignored and left to rust. In 1981 The Canadian Railroad Historic Association and The West Coast Railway Association worked together to gather donations to restore the engine. By 1873 they had enough funds and Engine 374 was moved to a warehouse on Granville Island, where she spent two years undergoing restoration. Next, there was a year she spent in North Vancouver’s Versatile Shipyards with some more donation money to finish the restoration.

On February 13th 1986 she was moved to Expo 86 Roundhouse site. Soon volunteers were cleaning the train and keeping it up to date, and by 1988 the public were invited to come and see the train.

The Parks board suggested a new building, and in the 1990’s the pavilion was built. Engine 374 has remained here ever since.

With the location so central, it’s very easy to visit.

While the pavilion isn’t huge, there are plenty of artifacts and maps to check out along one wall. I loved looking at these and feeling like I was stepping back in history. There is a kids section with toy trains for them to play with, and they are allowed to climb the steps to go on part of the train.

Near the entrance is a very small gift shop if you wish to purchase souvenirs.

Admission is free! But there is a donation box near the entrance which helps in the upkeep of the train.

The pavilion is staffed by volunteers.

Open daily year round, however this is dependent on the availability of the volunteers. 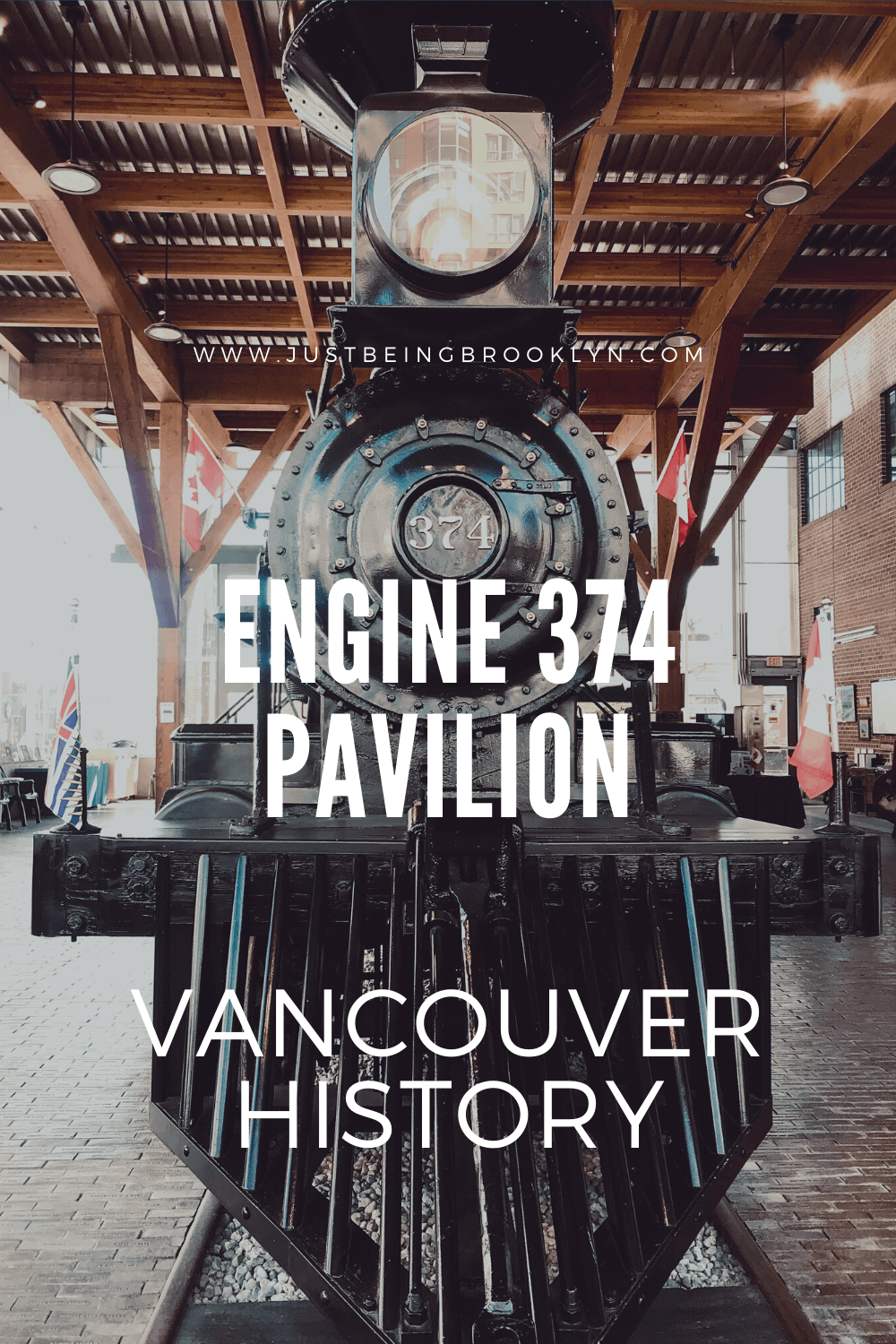 PrevPreviousFebruary In Review, What I Got Up To
NextWays That You Can Travel Without Leaving HomeNext