How To Explore The Great Ocean Road In Australia 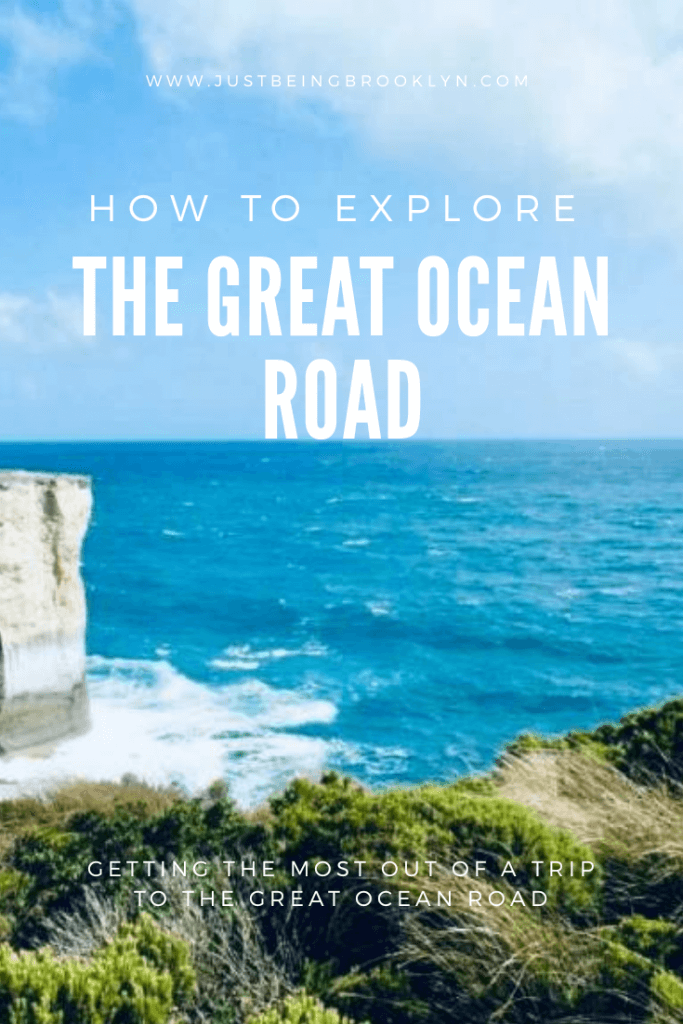 Known for being one of the most beautiful coastal drives in the world, on a Great Ocean Road trip you will be delighted to see not just the famous coast, but cliffs, empty beaches, plenty of wildlife, and nature all around you. This post will help you to explore the Great Ocean Road.

The Great Ocean road is well known for being a must do if you are in Australia. Located in the state of Victoria, many people leave from Melbourne and take a day trip.

If you are driving though, you can take a few days to do the drive, and spend as much time at each stop as you desire.

How To Explore The Great Ocean Road

Spanning 400 kilometres from Torquay to Nelson (or Allansford, depending on how far you want to drive), the Great Ocean Road officially begins about a 90 minute drive from Melbourne.

I took a day tour on a bus departing from Melbourne. The tour took about 12 hours to and from Melbourne, meaning we only hit up the highlights. I suggest renting a car and driving if you can, that way you can stop anywhere you like, and aren’t in such a rush.

Named on Australia’s National Heritage list, the Great Ocean Road is known as the world’s longest war memorial. It took 13 years to build, from 1919 to 1932, and was built by approximately 3,000 soldiers who returned from the war, and dedicated to all the soldiers killed during World War 1.

This famous surf spot is iconic, perhaps due to the fact that the Point Break movie ended here? That’s how I first heard of Bell’s Beach, but in reality it has been famous for some time, due to the great surf breaks. I got to go to a surf competition at Bell’s beach and it was so cool!7 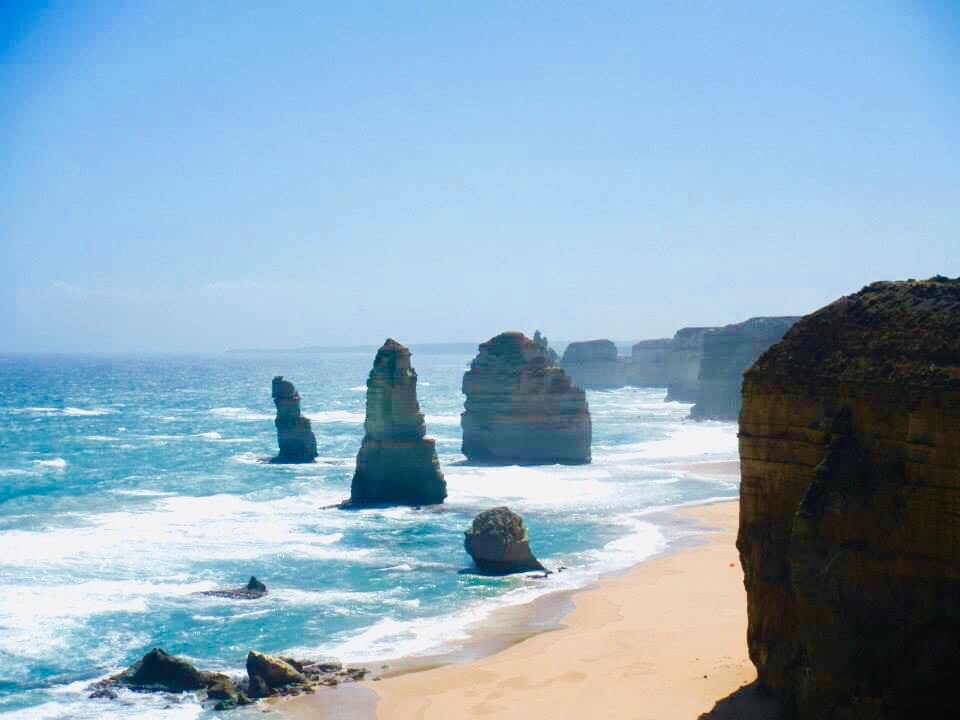 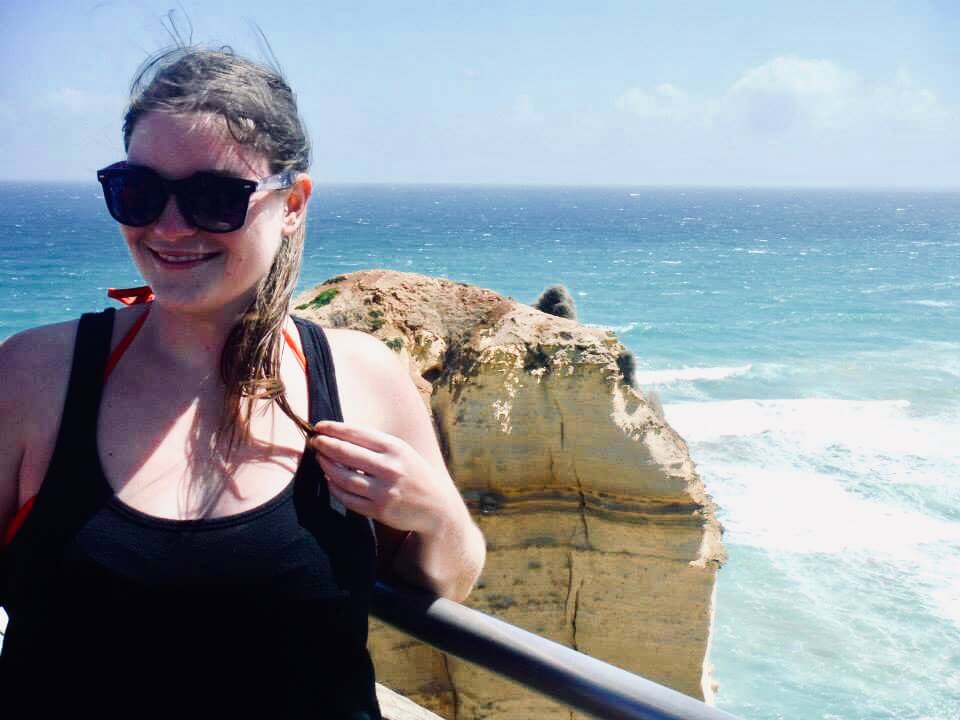 Located just off the shore of Port Campbell Nation Park, these limestone stacks are a stunning sight to see. With a height of about 50 meters above the water and formed about 20 million years ago, the harsh weather conditions from the Southern Ocean eroded the limestone cliffs to create caves, then arches that eventually collapsed, leaving us with these stacks in the ocean.

Though there were only 8 stacks, they were officially named the 12 apostles. In 2005 one of the stacks collapsed, leaving only 7 left.

Be prepared for large crowds and lots of wind while there. I knew that this was a very popular stop on the road trip, however I was completely blown away (haha, literally) by just how many people were there, all in a rush to see the same views.  But know, the crowd and winds are well worth it! 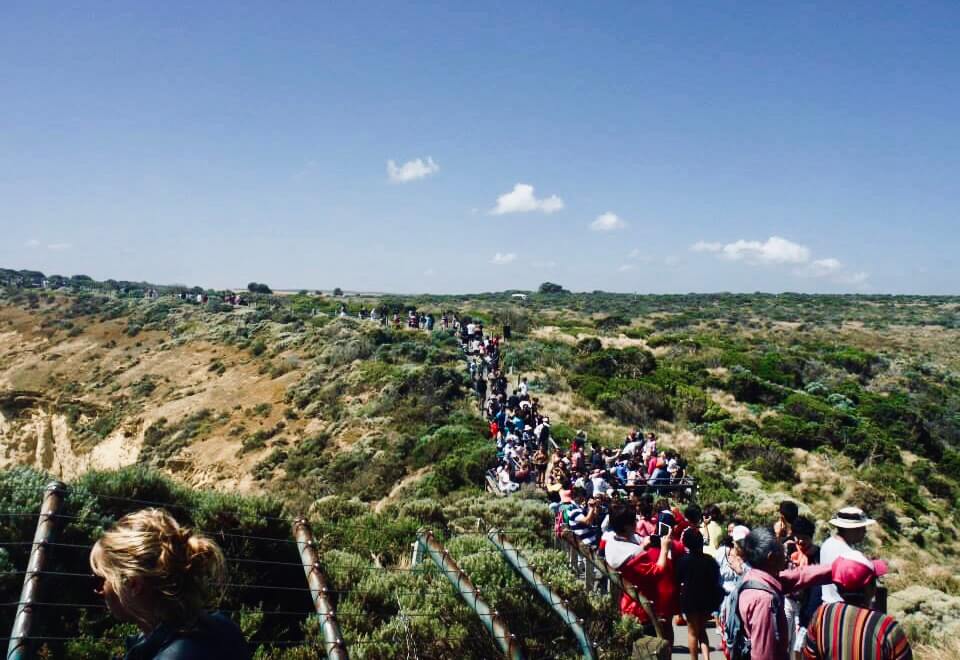 Want to get even closer to the apostles? About a 2 minute drive away are the Gibson Steps, where you can walk down to the beach for an even closer view. Keep in mind the changing tide when going down there though. 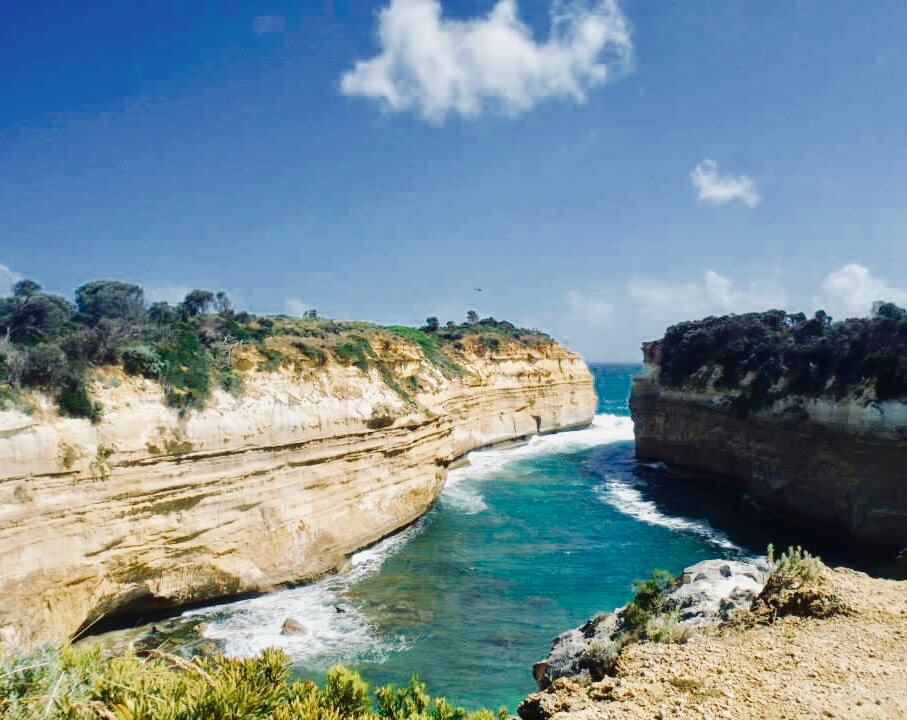 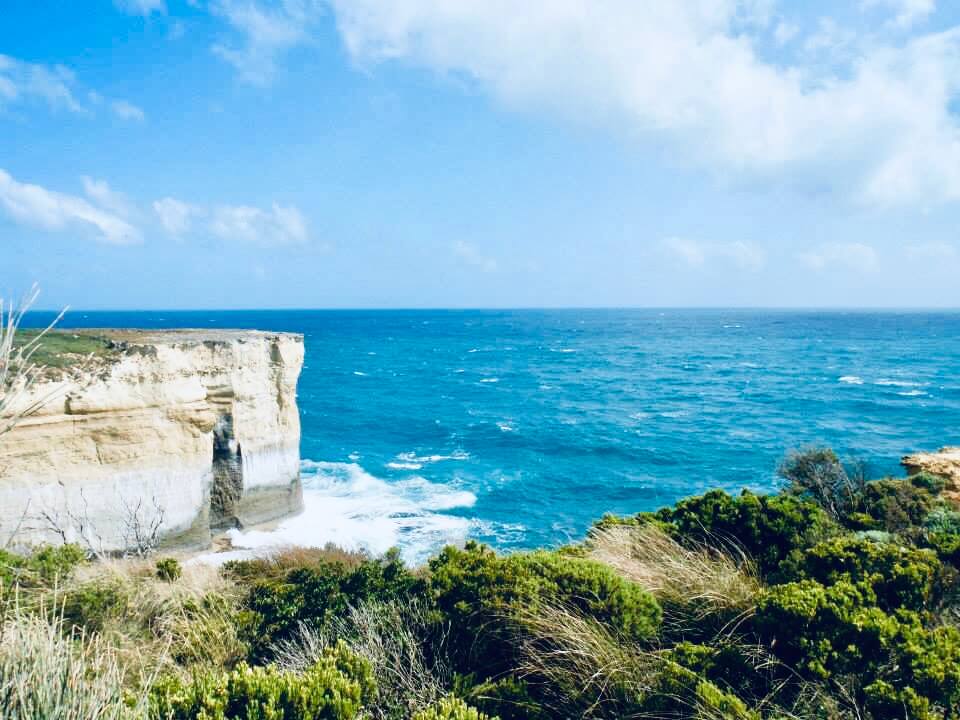 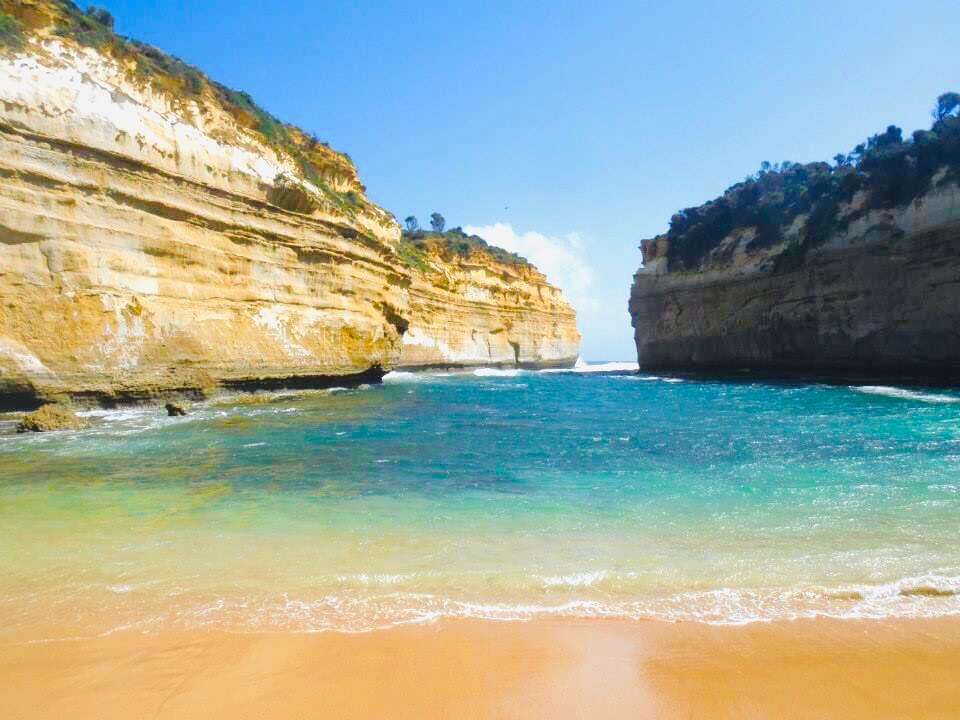 My favorite part of the road trip, the Loch Ard Gorge is less than a 5 minute drive away from the 12 Apostles. Named after the ship Loch Ard, which ran aground in 1878 after a 3 month journey from England. There were only two survivors, named Tom Pearce and Eva Carmichael.

To get to the gorge you can take steps down to the beach. This was such a gorgeous area, and if I had my way I would have stayed there all day.

Other than the beach, you can also take walks around the area for different viewing platforms. 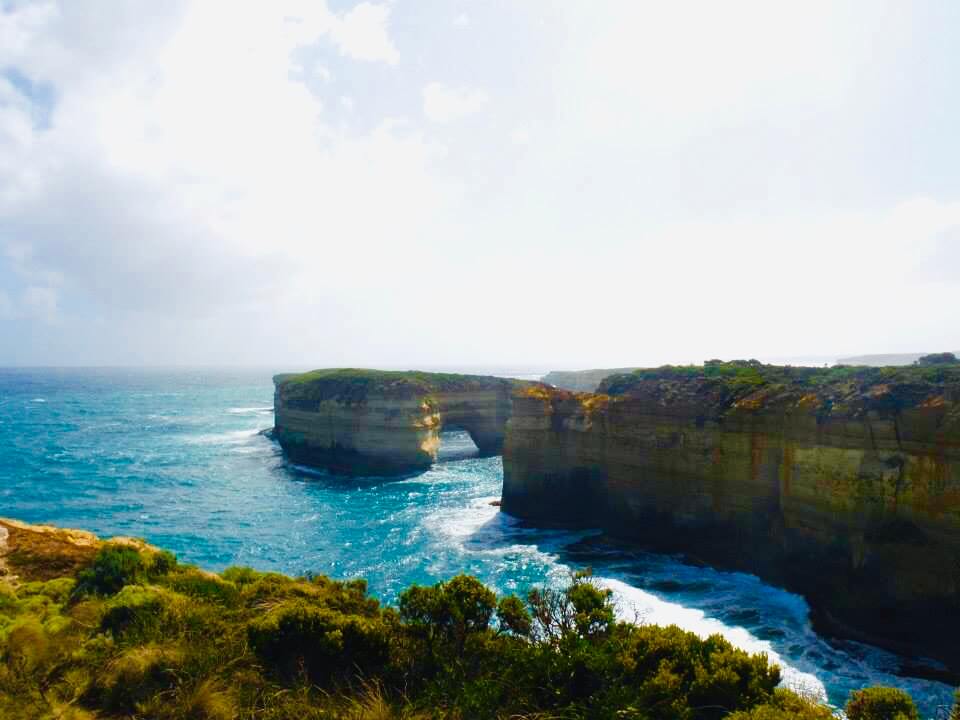 Formerly known as London Bridge, the bridge was originally attached to the mainland, however erosion eventually caused the bridge to collapse, thus leaving an arch. When the bridge collapsed on January 15th, 1990, two tourists were stranded on the outer part. A helicopter had to rescue them.

Now this is where my tour ended, and our bus returned home. This is why I suggest renting a car, because this was only half of the actual Great Ocean Road! There is still much more to see. 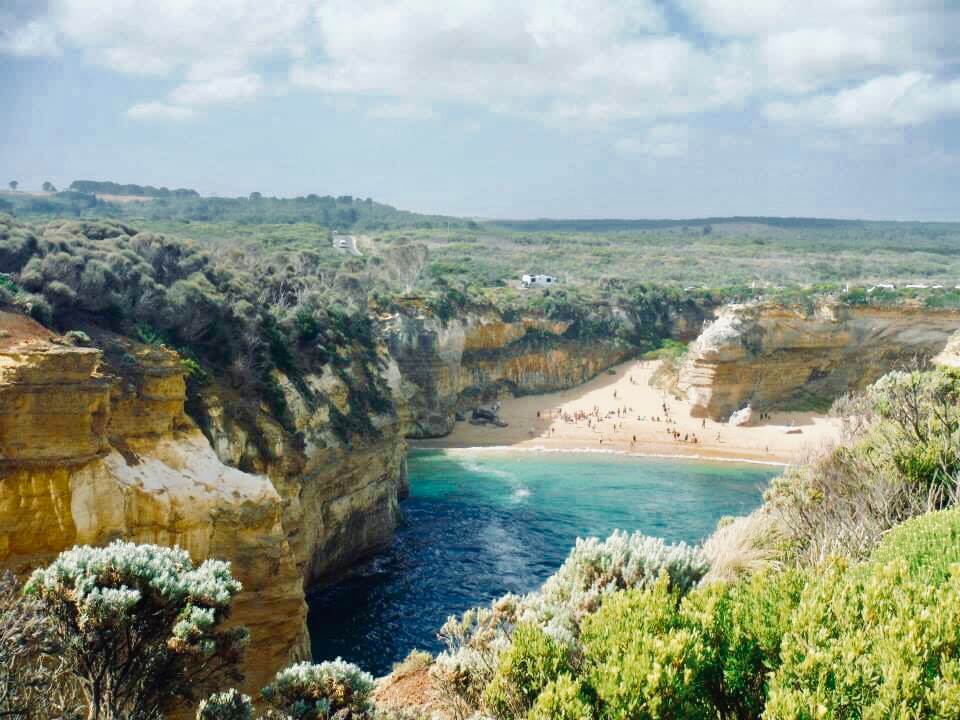 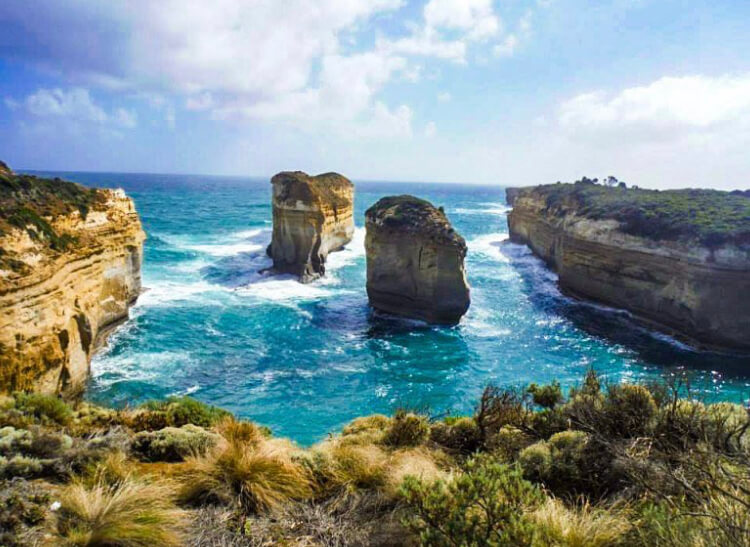 What I Didn’t See

But what you can see! I was pretty disappointed when my tour ended here. I was so glad to see the main touristy bits, as the coast has some of the most beautiful views I had ever seen in my life (Want some more beautiful coast? Check out the Bondi to Bronte Walk). But I knew there was still more to see!

When deciding to go on a Great Ocean Road road trip, I didn’t expect to see koalas that day. Little did I know that some of the best koala wildlife viewing is in Victoria. Specifically Kennett River. Go down Grey River Road in the middle of town and look up into the trees. There you’ll see koalas sleeping. 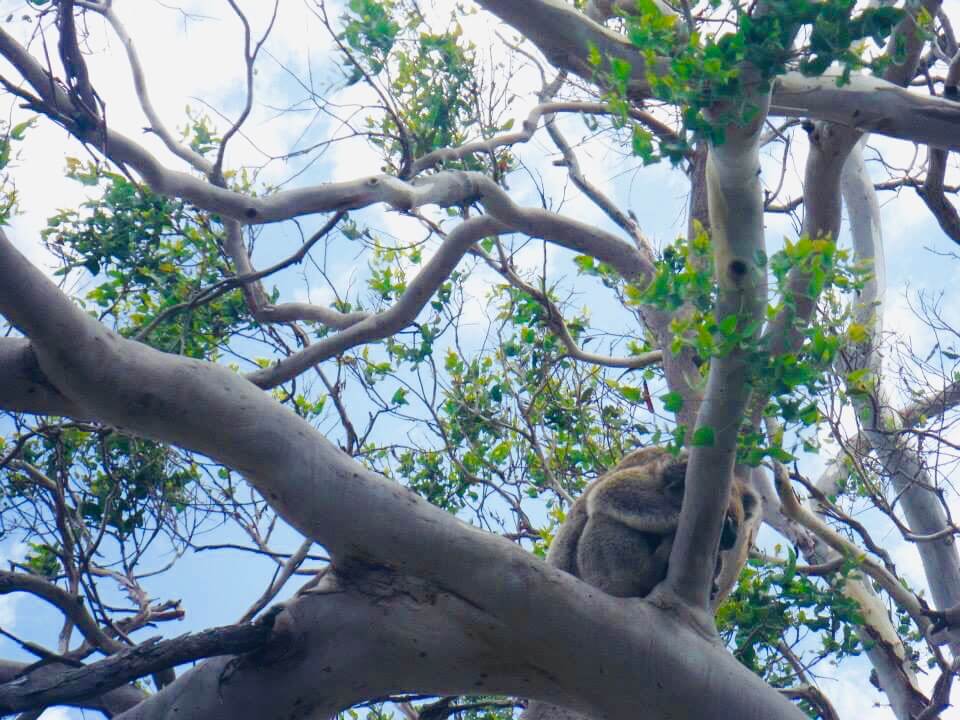 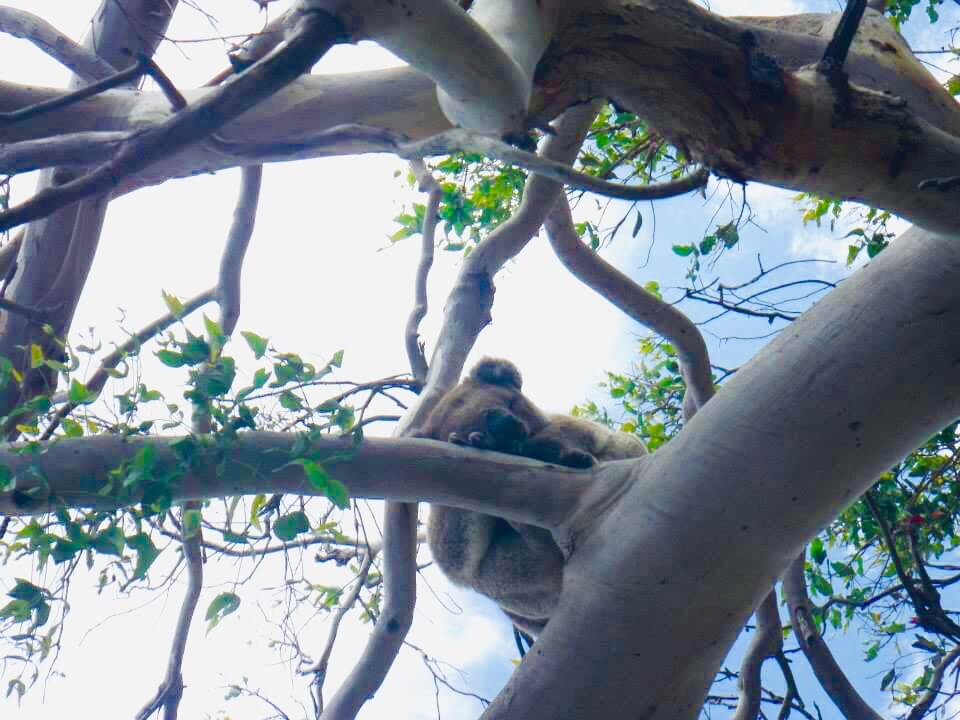 Length – 9.5 hours, 243 Kilometers from Torquay to Allansford, but many people take a few days at least to do everything on this road trip.

Want to see Koalas in the wild? Head to Kennet River, a popular spot to look up and see koalas sleeping in the trees. Our bus driver actually knew a small road (that looked quite sketchy) to drive down. I wish I could remember the name of the road, but it was incredible looking up in the trees and seeing dozens of koalas sleeping away. That is an experience I will never forget.

Fuel up your car when you see a petrol (gas) station. Australia is infamous for having long distances between petrol stations when you aren’t in a major city, so save yourself some stress and fuel up!

Even on the warm days, the wind gets very cold – pack a jacket!

Have you ever explored The Great Ocean Road? 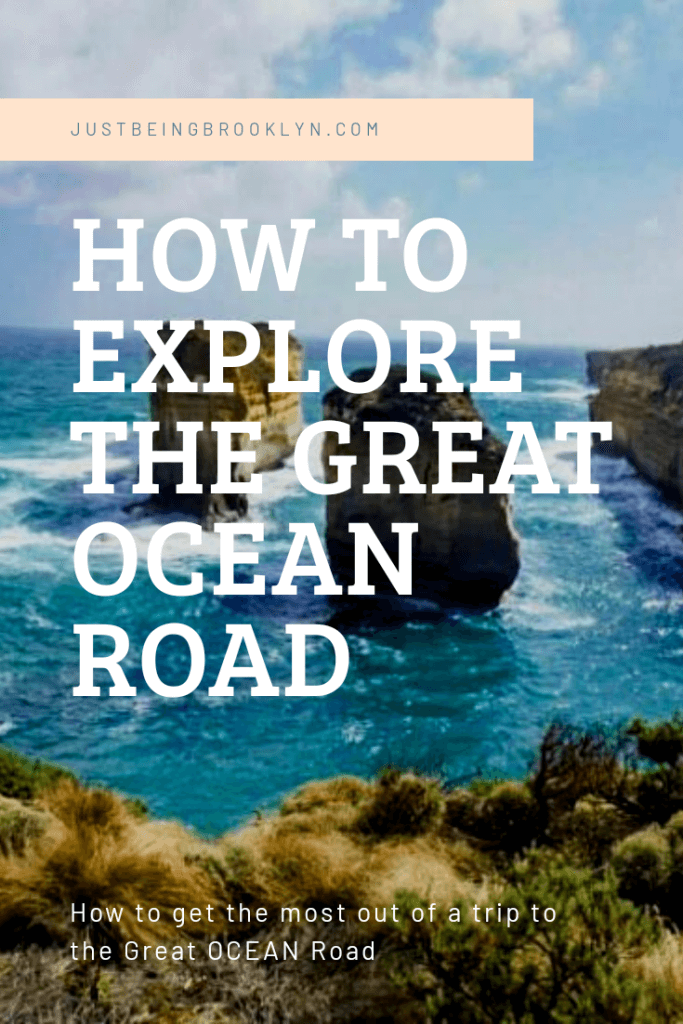 PrevPreviousMy Birthday At Vancouver’s Aquarium
NextChecking In To The Westin, Puerto VallartaNext