Where To Stay In Puerto Vallarta, The Westin VS The Marriott 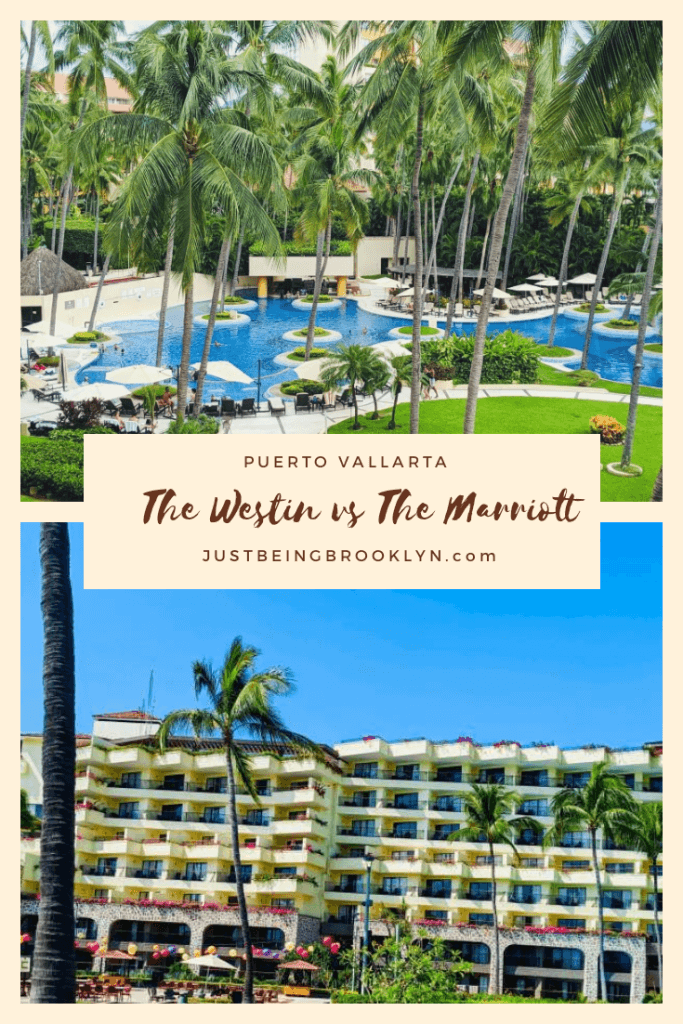 Where to stay in Puerto Vallarta, The Westin vs The Marriott.

One of my absolute favorite parts about planning a trip is choosing where to stay. I am that person who will spend hours, if not days, looking at every accomodation option. When I found out that I had been gifted a trip to Puerto Vallarta, the first thing I did was check out where I was being put up, and look at the hotels that the other winners were staying at as well.

When I saw that I was staying at two different hotels I was ecstatic. Especially because I had heard great things about both the Westin and the Marriott when doing research into Puerto Vallarta.

But which hotel was better to stay at in Puerto Vallarta, The Westin vs The Marriott?

Where to stay in Puerto Vallarta? The Westin VS The Marriott

Both The Westin and The Marriott are located in the Marina Zone. 15 minutes North of the Malecon and only a 5 minute drive from the Puerto Vallarta International Airport, the Marina Zone is known for being a bit more expensive than other areas, and here you’ll  find plenty of resorts, yachts, golf courses, and fancy restaurants.

In the 1980’s the peso lost much of its value, leading many North American tourists to vacation in Mexico, and meaning that Puerto Vallarta tourism doubled in less than 10 years. Because of this, in 1986 the Guitron brothers, Jorge and Jose, began a business development that led to what is now the Marina Zone.

They planned for golf courses, fancy boats, luxurious hotels, and plenty of higher end boutiques to shop at, and that’s exactly what the Marina Zone is.

The Rooms, The Westin vs The Marriott

As I wrote in my hotel review of the Westin, I’m glad we stayed here first. While the room was nice (I loved the earthy tones and wood), it was also very outdated, and that really showed in the bathroom. There were also small bugs crawling all over (not bedbugs or anything like that, so don’t worry!), which was disappointing when we discovered that they got into our bagels that we got at the market for our breakfast, though they were tightly sealed and hidden away.

Our room had a balcony overlooking part of the pool area, and lots of trees. We could see fireworks on Halloween night coming from the beach.

The room had two double beds, and a relatively large bathroom, which included a tub.

The Westin was actually one of the first hotels to open up in the Marina Zone, and has 263 rooms spread over 14 floors. 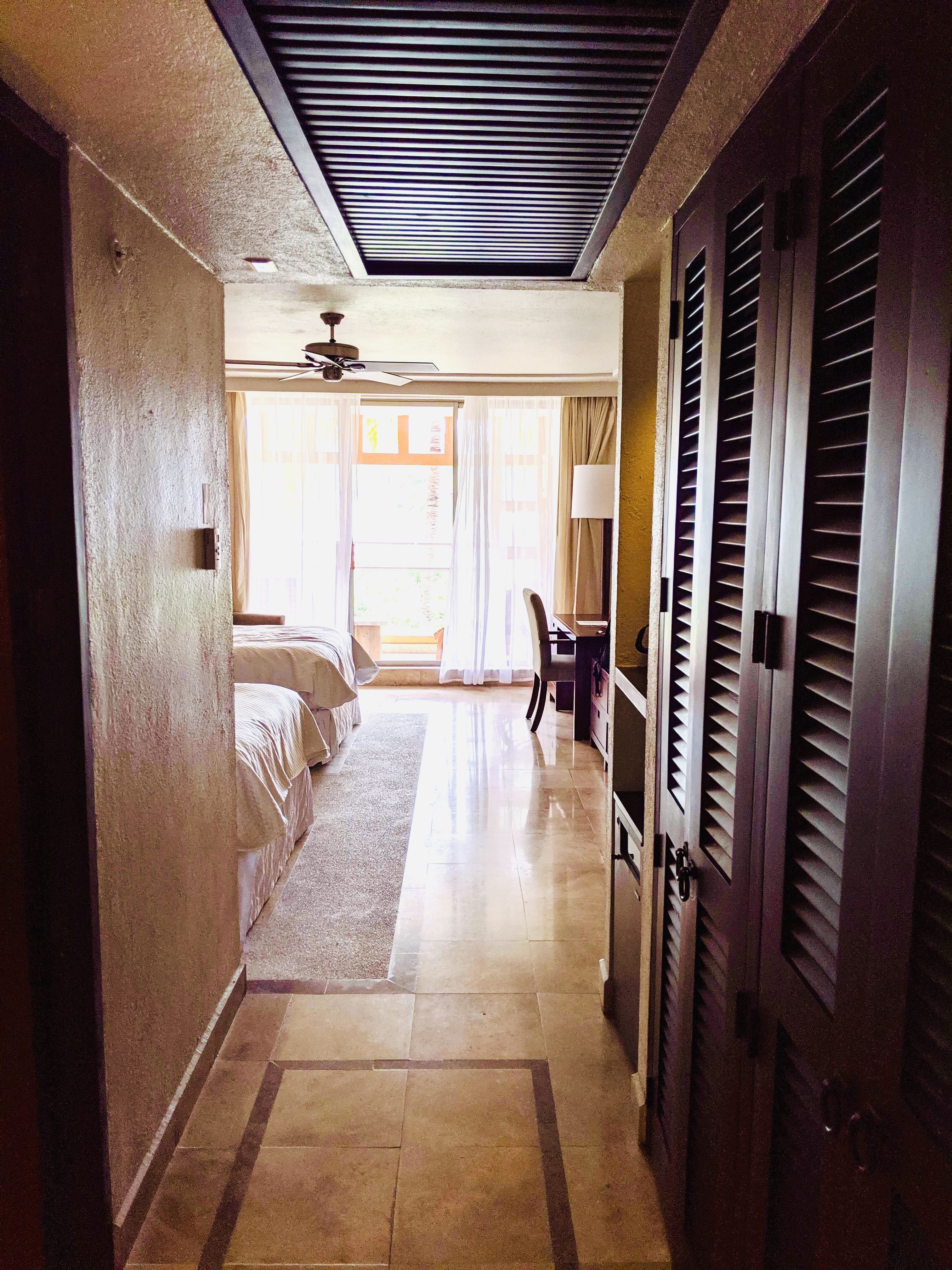 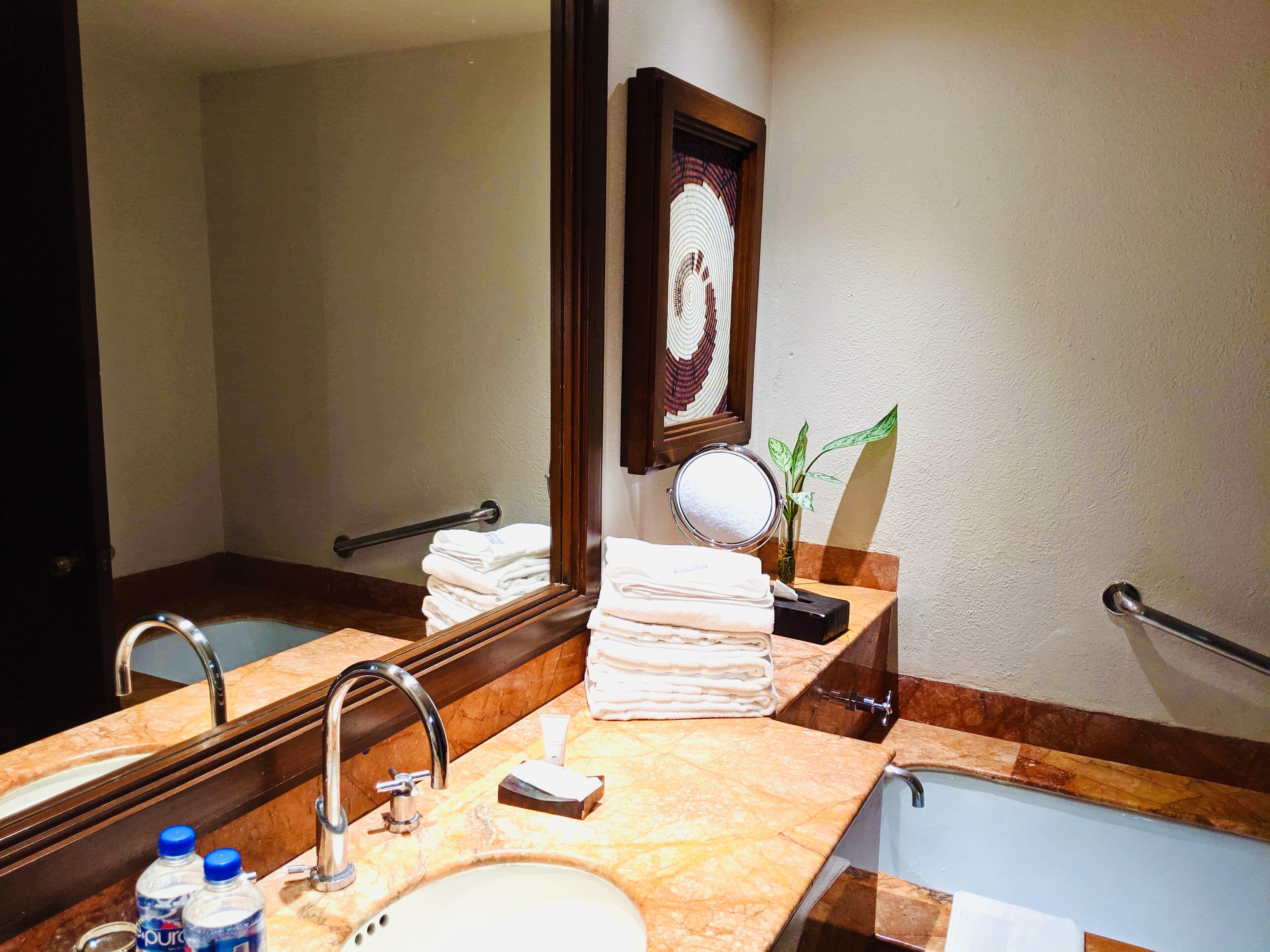 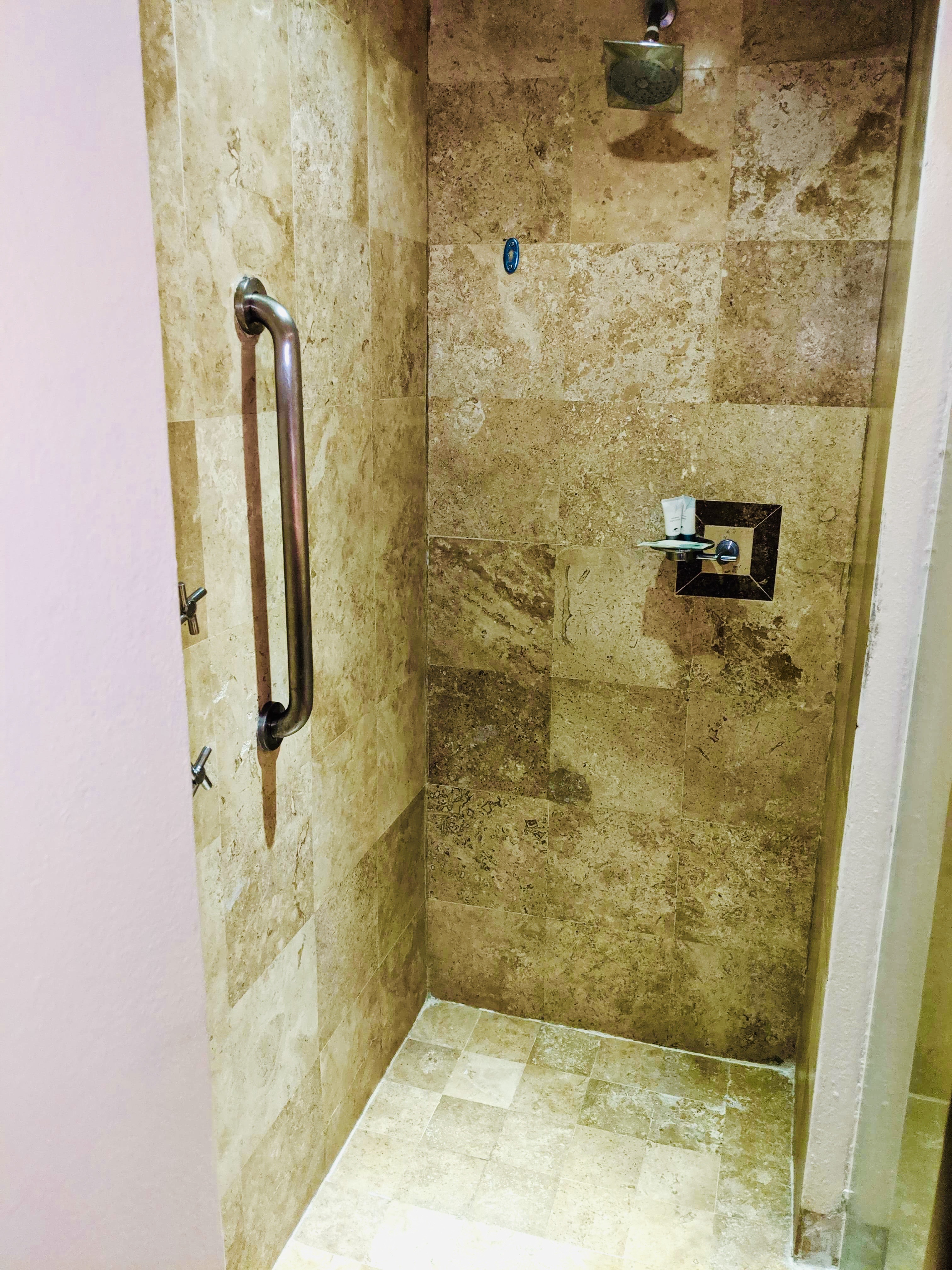 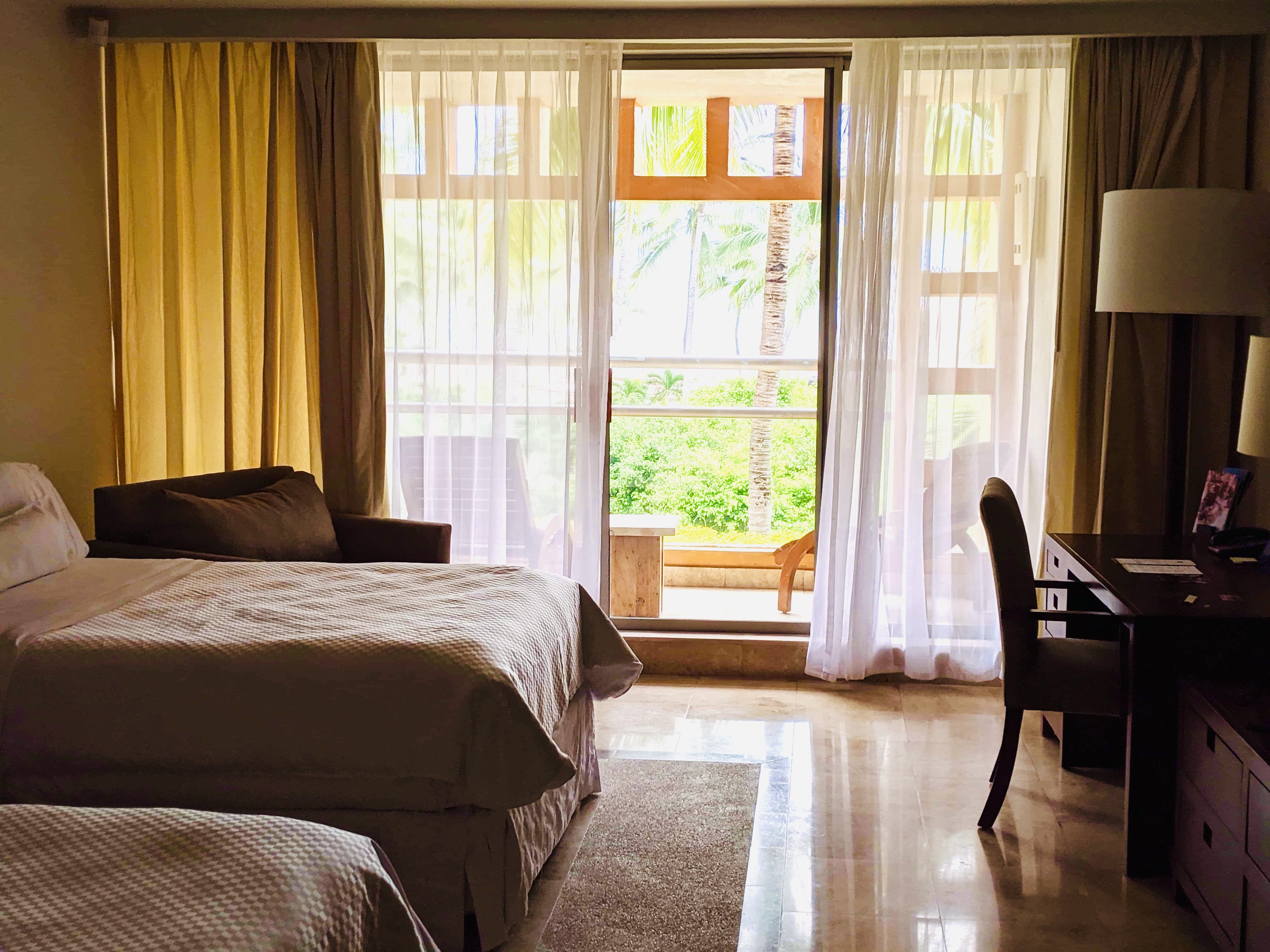 Our room at The Marriott was amazing! I’m really glad that we stayed here second, because to be truthful I would have been very disappointed going from The Marriott to The Westin.

With 405 rooms over 9 floors, this hotel was stunning. I loved our room there so much, it felt very cosy.

While the room was smaller than our room at The Westin, it was significantly nicer. The room was extremely clean, not a bug in sight! There was one king sized bed, a couch (which we spent some time on in the evenings watching Vikings on Netflix, while eating Deli Los Mangos panini’s on), a coffee table, and a huuuuuuuge balcony with incredible views over Banderas Bay. Special mention to the shower here, because it was the best shower I’ve ever showered in! 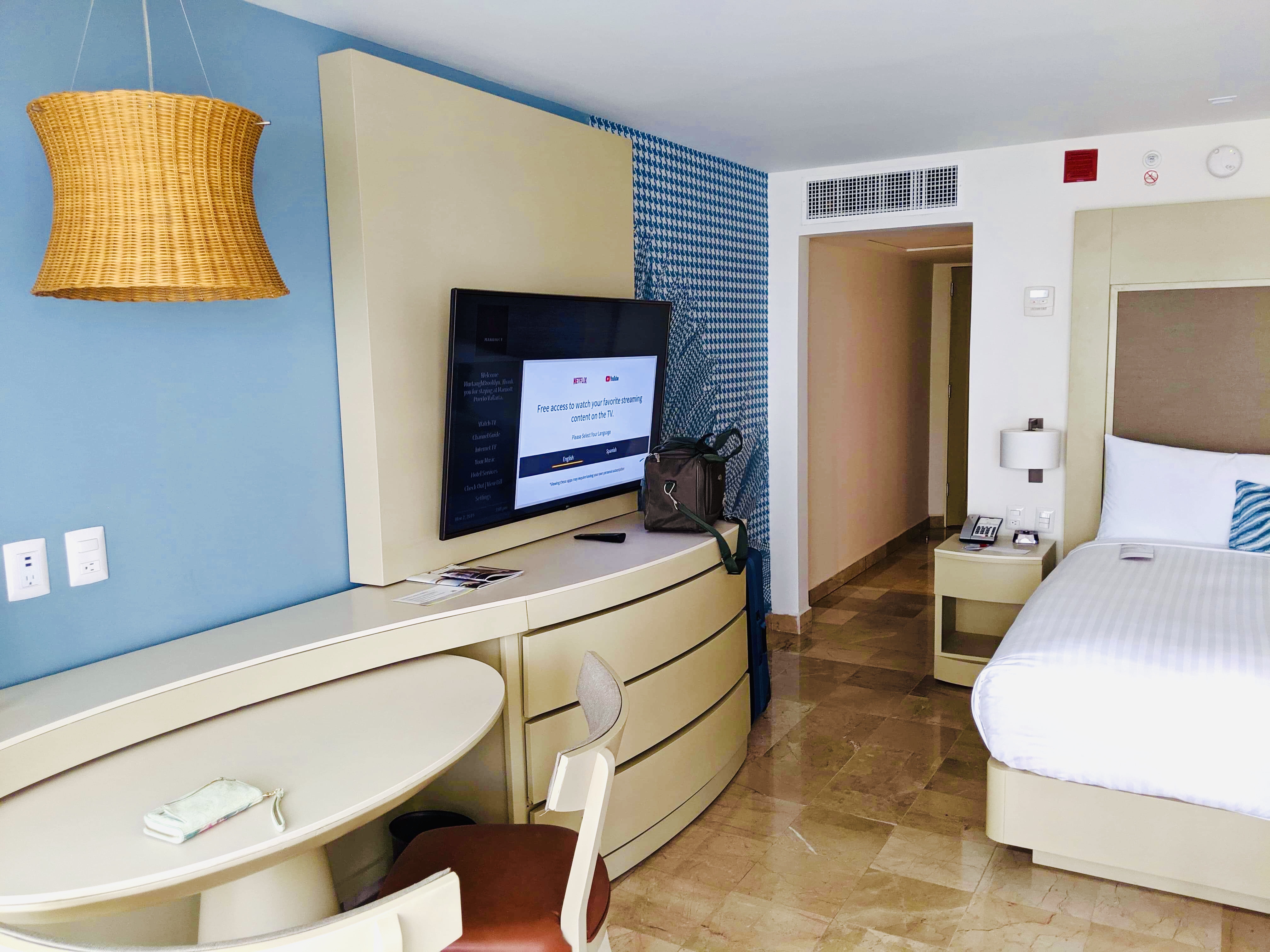 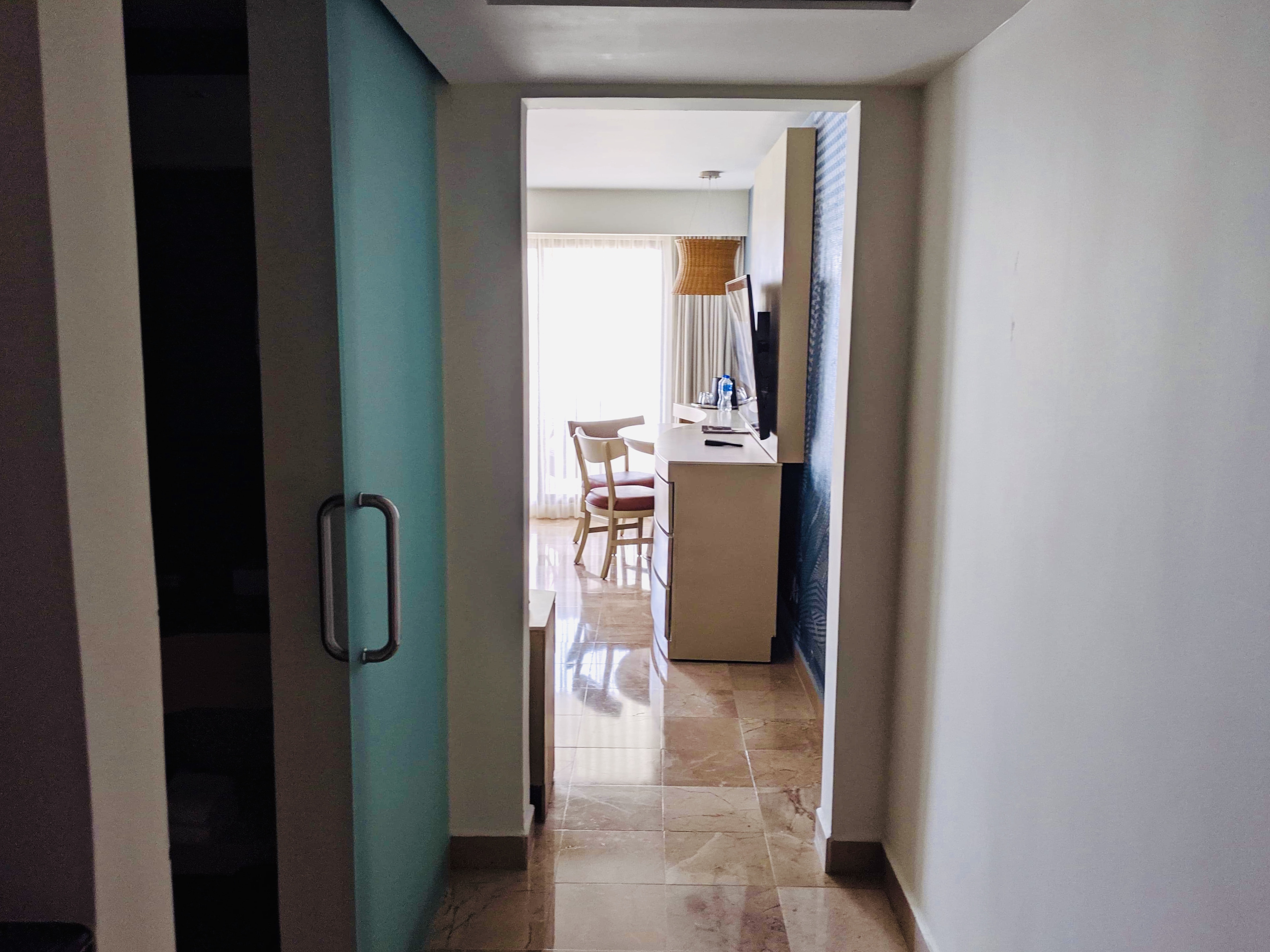 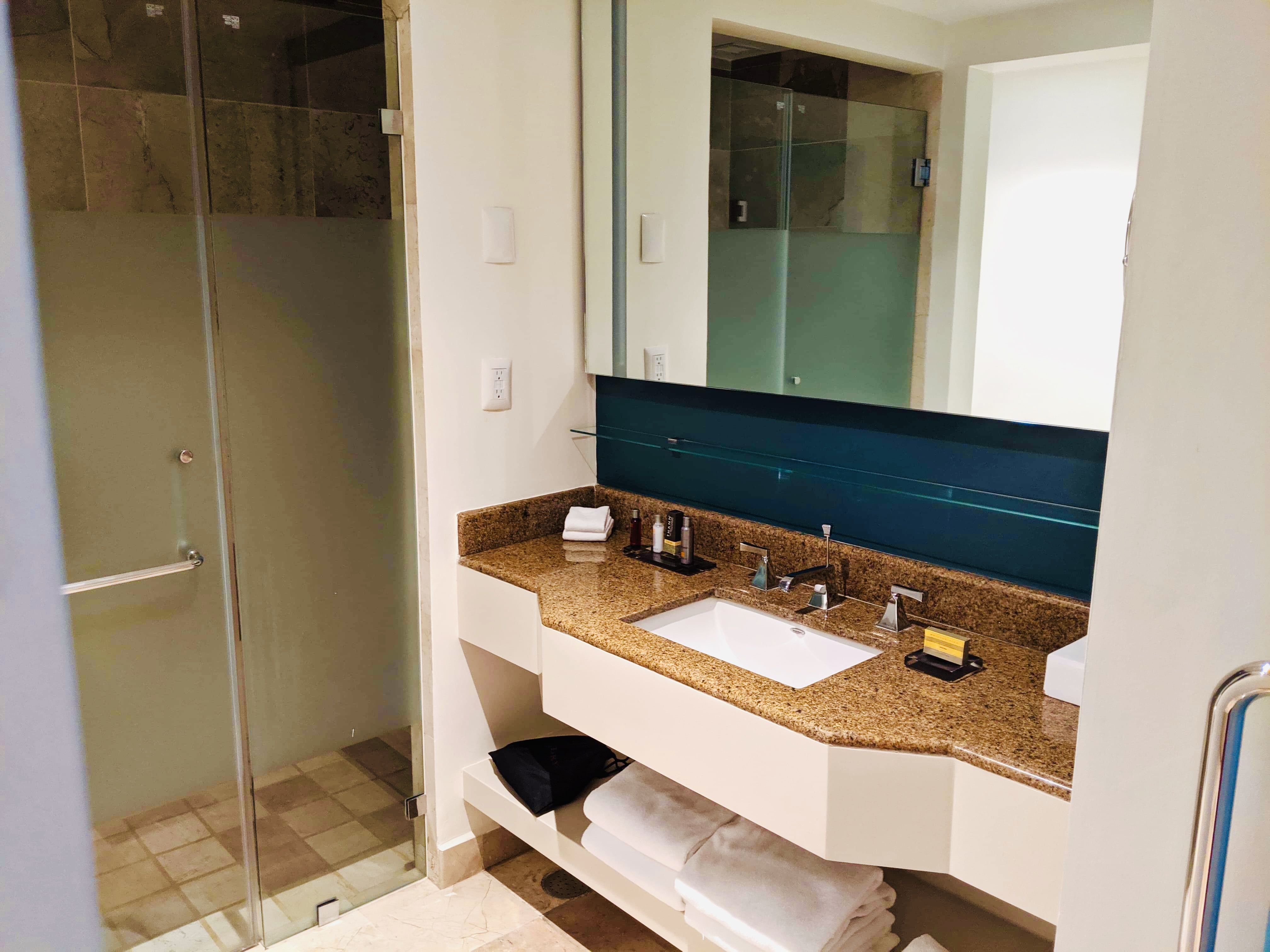 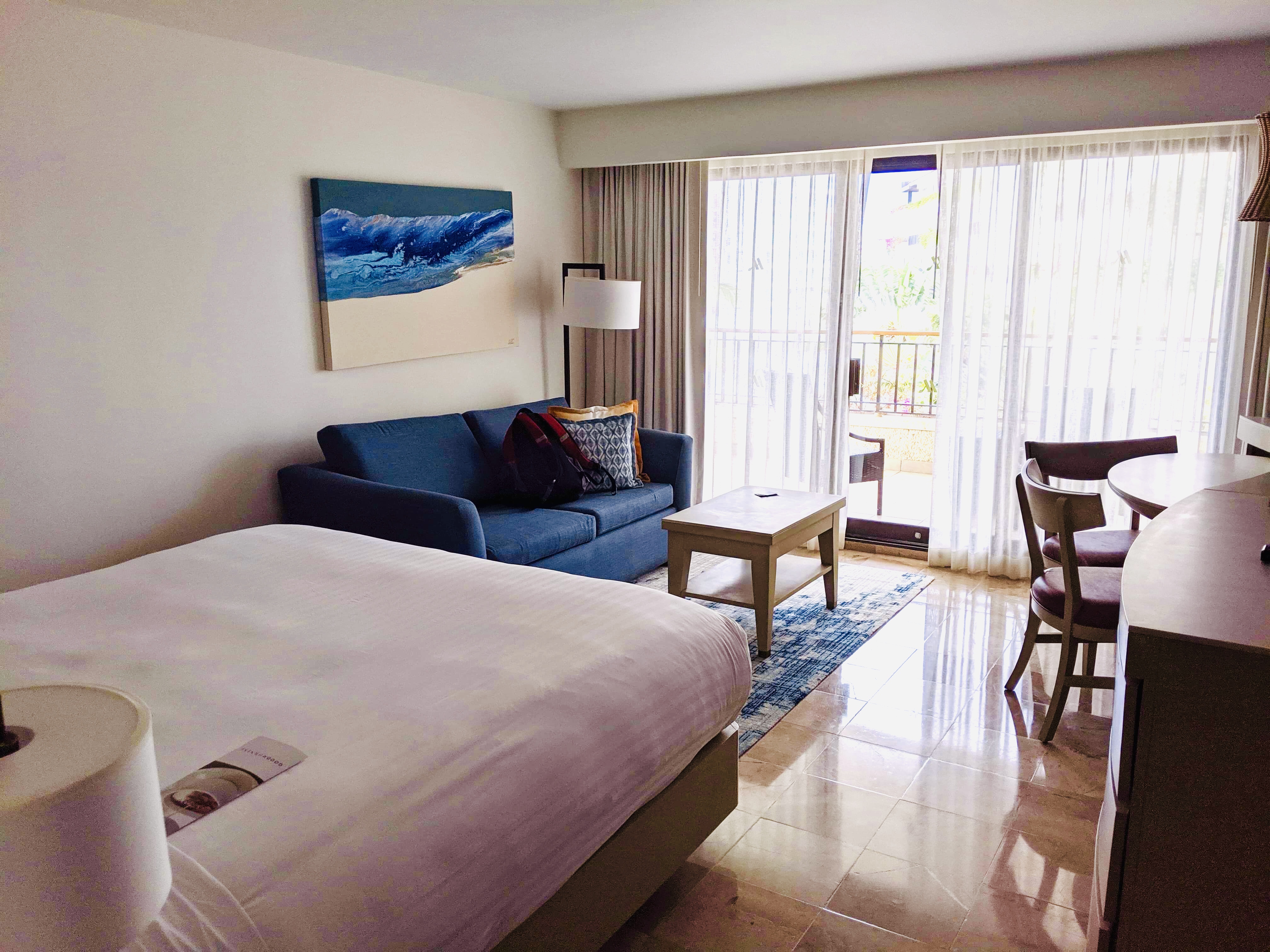 Where To Eat In Puerto Vallarta, The Westin vs The Marriott

The Westin has 3 restaurants on site, not including room service and a starbucks.

Arrecifes Seafood & Steakhouse. We did not eat here, but the open air restaurant sits beachside, with beautiful fairy lights lighting the venue with a beautiful view of Banderas Bay.

El Palmar Restaurant. Open for breakfast, lunch, and dinner, we only ate one meal here, breakfast. We arrived around 10:30 am, when they were prepping for lunch. They told us we could still do the breakfast buffet if we wanted to, so we said yes. The food was delicious, however, I would have rathered just wait for lunch, since as we were going up to make our plates the staff was taking out the breakfast foods, leaving us little options for the buffet. I was able to try both red and green chilaquiles, which was delicious. But when we got the bill, it was around $75 CAD, so we didn’t eat here again.

La Cascada Restaurant & Bar. Open for dinner, this is where we hung out in the evenings once we got back from being out. There is a big screen tv that would play old 90’s music, though there is also live music that plays here seasonally.

What we enjoyed most at La Cascada was the pool table, where we would grab a beer and play pool until we were ready to head back to the room.

The Marriott has 7 on site dining options, not including room service and a small ice cream stand.

La Estancia. Open for breakfast, this is where you’ll go if looking for a Mexican breakfast buffet.

Mikado. Open for dinner, Mikado offers teppanyaki made right at your table, as well as made to order sushi.

Champions Sports Bar. We spent a few evenings here, drinking litres of beer, and watching sports. I watched my first UFC fight here, and it was so much fun! Personally I didn’t enjoy the food. I ordered a quesadilla and a salad, and both were gross. If you want good Mexican food, Champions is not where you want to eat. But that’s okay, you’re in Puerto Vallarta, where the best food won’t be found on your resort.

They also serve plenty of American options, such as wings and burgers.

Ceviche & Tequila Bar. This is where we took our cooking class, where we had beautiful views of the pool area and ocean. There are over 180 tequilas, and we had the opportunity to taste a few.

Deli Los Mangos. This deli was my favorite place for a quick snack. They had premade sandwiches and salads, chips, fruit, cookies, a drink cooler, and a deli where they would make made to order sandwiches and pizzas.

I ate sandwiches from here 3 times, they were so delicious. The best sandwich I’ve ever had. The morning we left, before heading to the airport, I got one last sandwich.

Dress Code Casual, open for breakfast, lunch, and dinner, and all snacks.

Nosh Sunset Bar + Bites. This is a new swim up bar that offers drinks and light bites. 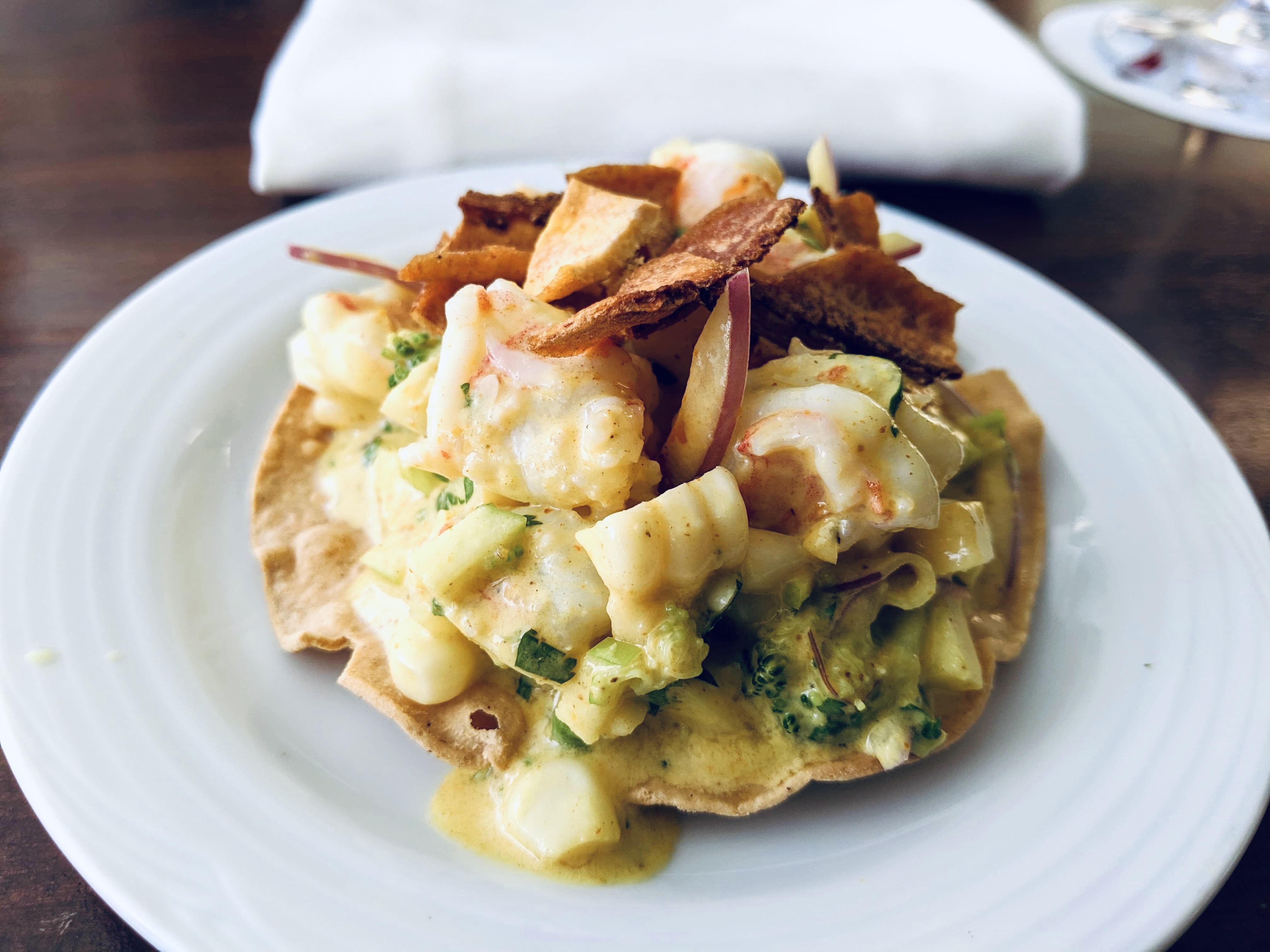 Things To Do In The Marina Zone

Walking the Marina boardwalk is a lot of fun. This is really the only activity we did in the Marina Zone, since we mostly went to different zones.

The boardwalk has lots of small shops and restaurants, and from October to May, every Thursday evening beginning at 6 pm there is a market, with lots of vendors selling their wares, there is live music and delicious food.

When we stumbled upon this market it was Halloween, and everyone was dressed up, handing out candy to the children who were trick or treating at the market.

Otherwise, people mostly stay in the Marina Zone for the resorts and all of the golf courses.

Personally I could spend an afternoon on the boardwalk eating and drinking at my favorite restaurant, Victor’s Place, otherwise known as Cafe Tacuba.

Why yes, cats have their own category. 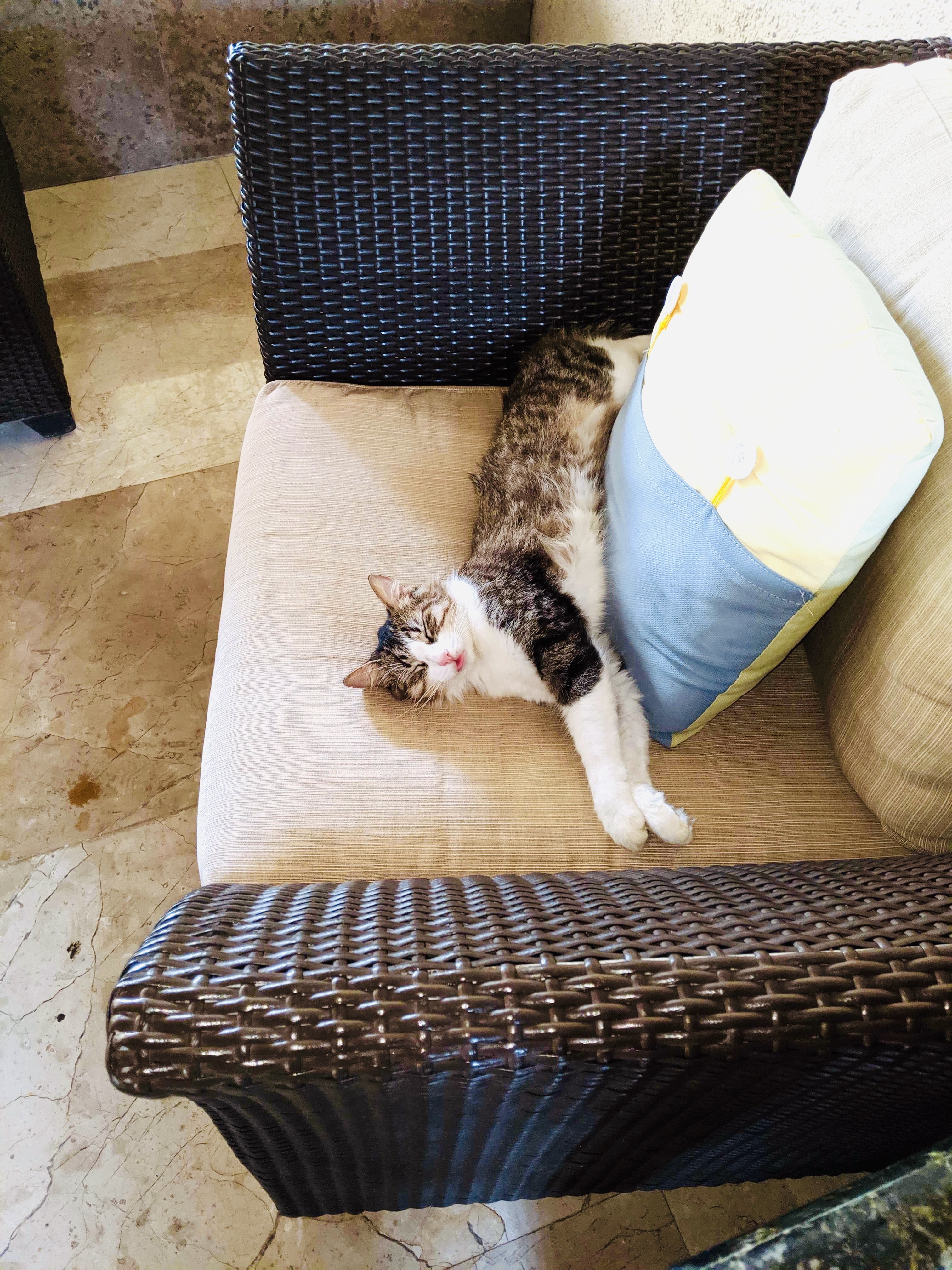 Wandering around the property at The Westin you’ll see random cats playing or sleeping, which is adorable! They leave food and water throughout the property for them.we spotted this cutie sleeping with their little tongue sticking out!

The Marriott is home to resident cat Mitzy. She walked in one day and decided to claim the hotel as her own! She’s friendly, and likes to sleep in the open air lounge. We only ever saw her snoozing, but she’s known to be very friendly. We also saw a few other cats running around the pool area! 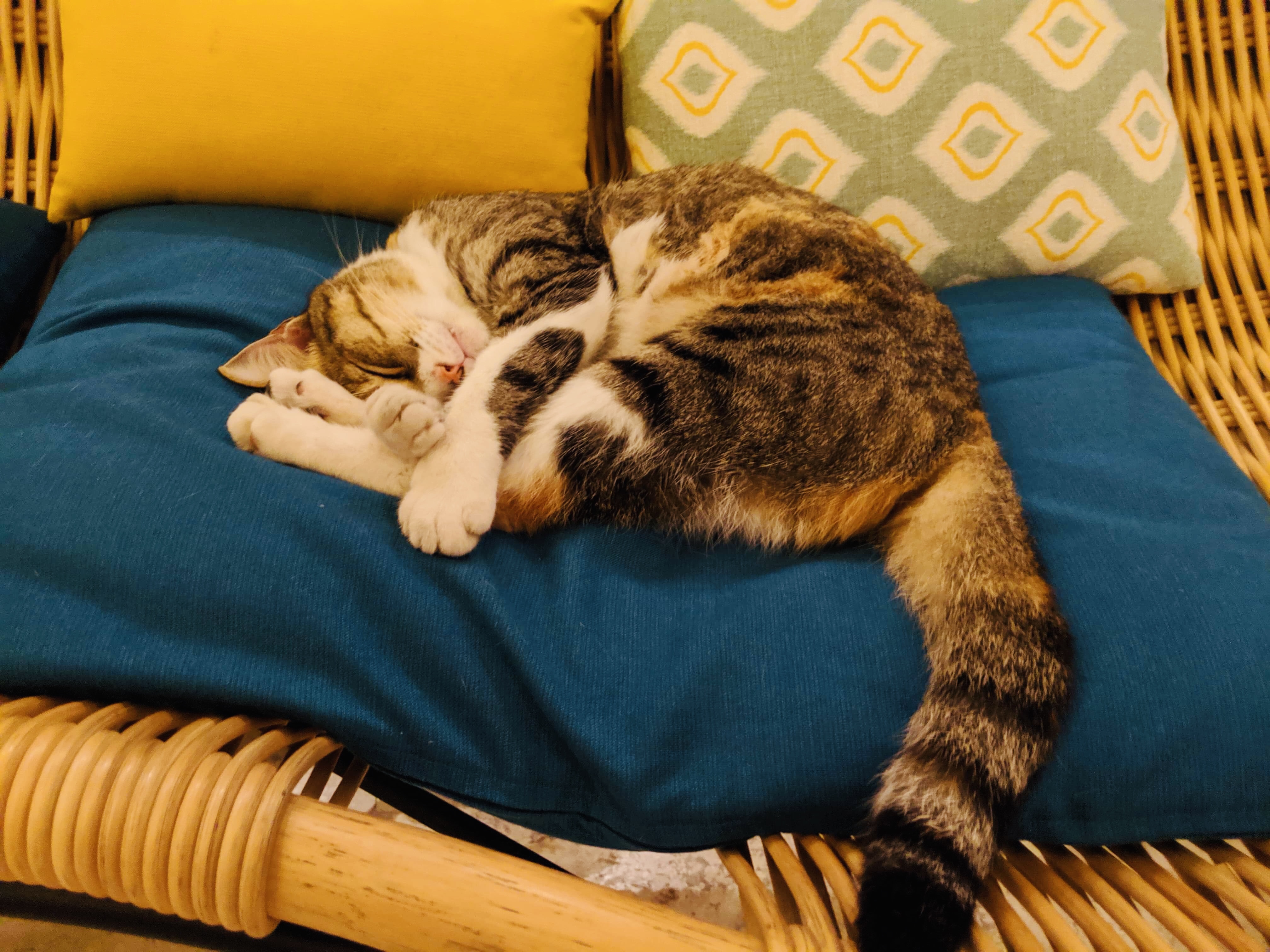 Need To Know About Puerto Vallarta, The Westin vs The Marriott

Distance from Airport – 1.2 miles North, a 5 minute drive. There is no shuttle service provided.

Rooms start around $129 USD per night.

Distance from Airport – 1.4 miles North, a 5 minute drive. There is no shuttle service provided.

Rooms start around $139 USD per night.

Between the two I would prefer to stay at The Marriott any day. It’s much nicer, updated, clean, and beautiful. The Westin is somewhere I would stay if I had to, and would only be there to sleep. This isn’t to say it’s not a good hotel, it definitely is! I just much prefer The Marriott.

Where would you prefer to stay in Puerto Vallarta, The Westin vs The Marriott? 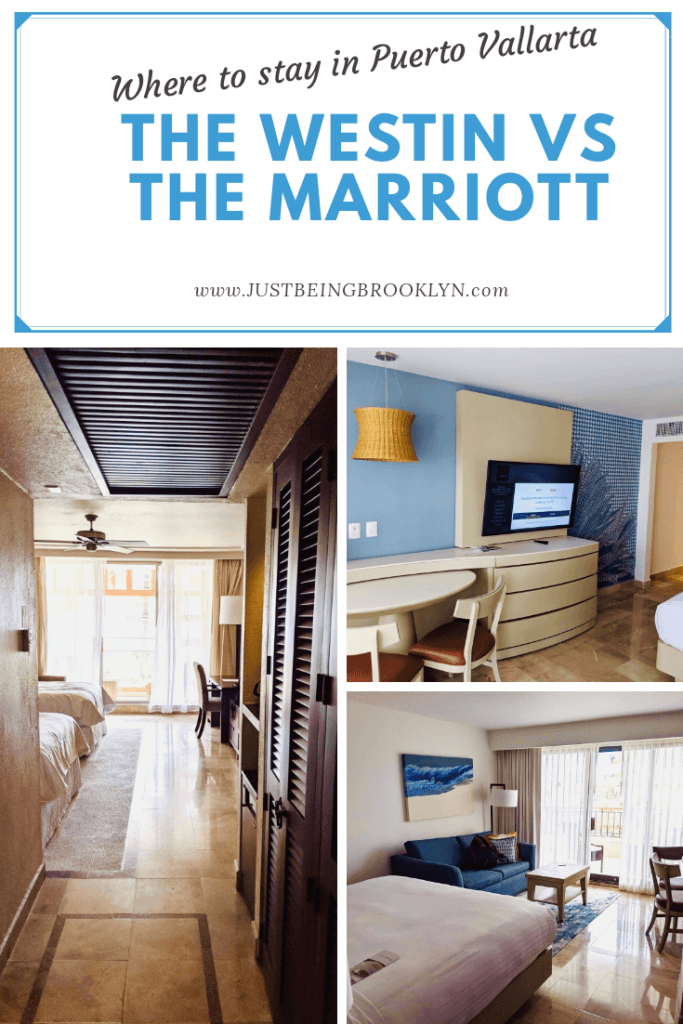 PrevPrevious8 Things That Surprised Me About Puerto Vallarta
NextShould You Become An Au Pair? Find out if being an au pair is right for youNext